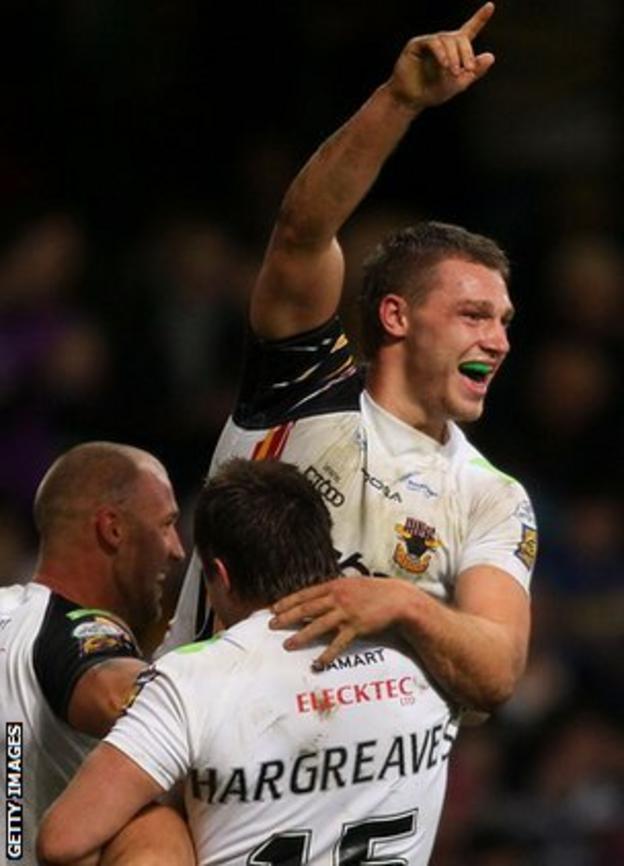 Elliott Whitehead and Shaun Ainscough both claimed hat-tricks as Bradford dished out a Challenge Cup battering.

The cash-strapped five-times winners, still striving to find £1million to stay in business, ran in 13 tries, stand-in Danny Addy kicking 10 of them.

Matt Diskin and Keith Lulia both bagged a brace, before tries for Ben Jeffries, John Bateman and Craig Kopczak.

But Doncaster actually scored first, in the opening 60 seconds, through Russ Spires, improved by Keiran Hyde.

With Heath L'Estrange suspended after a spear tackle during the victory over Leeds on Good Friday, and Jarrod Sammut (knee) and Brett Kearney the latest additions to Bradford's long injury list, even with forward Bateman returning, the hosts were down to bare bones.

Doncaster, Championship One's most prolific scorers with 160 points in four games this season, had their hopes rocked when experienced half-back Paul Cooke, a Challenge Cup winner with Hull in 2005, failed to shake off an Achilles tendon injury.

But the two divisions between the teams were clearly evident throughout, once Bradford had got over the shock of shipping a try in the opening minute when, having conceded a scrum through Addy fumbling the kick off, Spires crashed over from first receiver.

"It was a wake-up call for us - we made an error dropping the ball from the kick-off and were just soft there. We toughened up a little after that so it probably helped us more than it helped them.

"We knew they would come hard at the start but we were poor and not happy with the try. "It kicked us into gear, our ears pricked up a bit and off we went.

"It's the one part of our lives that we can control."We can't control the way the club is or what will happen in the next month or even if we are going to get paid or not.

"But we can control the way we train and play, and it has really brought us together - this is a great place to be at the moment."

"They were too big and too strong and we knew coming into the game that it would be a massive test to try and handle the physicality.

"We couldn't handle them out of the ruck - they were too big and powerful and got on a roll.

"I felt Bradford played exceptionally well and have some potential international players coming through - like John Bateman and Tom Burgess.

"In a couple of years time I think they could be monsters in the game."