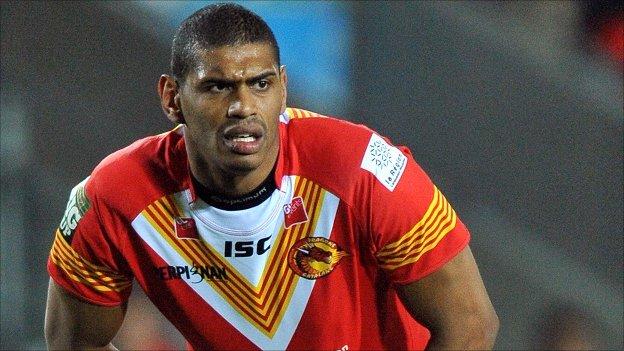 Ian Henderson also crossed towards the end of the opening period to leave the home team a mountain to climb.

Sam Latus then finished a length-of-field move to see Rovers close to within two points, but Michael Dobson could not add the goal.

With two other missed conversions to his name, Dobson's lack of accuracy with the boot ultimately cost Rovers dear.

Pryce opened the scoring in the seventh minute with a close-range effort as Rovers were called upon to defend their line for long periods.

I don't think we got away with it, I think we deserved to win

Playing into a strong headwind, Rovers looked like getting to half-time just 8-0 down until a moment of brilliance from Pryce.

Anticipating Hodgson was going to jump out from marker, Pryce chipped through from 30 metres before running on to ground his own kick.

Henderson then capitalised after Latus knocked on when attempting to gather a high kick.

Taylor started the comeback for Rovers after a superb run from Rhys Lovegrove, whose powerful drive dragged the defence out of position.

Green then sold the Catalans defence a dummy with his show-and-go move.

A 40/20 provided the platform for Hodgson to score Rovers' third, going over from close range after spotting a gap.

The try of the game came after Craig Hall advanced the ball to the halfway line before finding Dobson, who in turn sent Kris Welham away before delivering the scoring pass for Latus.

"I'm just dwelling on losing a game of rugby that we really should have won.

"It's not every game you score more tries than your opponent and lose. It's devastating.

"When it's the first game and you're drawn against another Super League club it doesn't feel like the Challenge Cup.

"If we had won and then drawn a side not in Super League it would have raised the ante."

"I thought we deserved to win. I don't think we got away with anything.

"It was pretty tough watching the second half of defence and scrambled attack.

"It was disappointing that we couldn't get a better rhythm in our attack. We just had to defend.

"I don't know if we got a penalty in the second half. But we fought hard and that was a good thing."