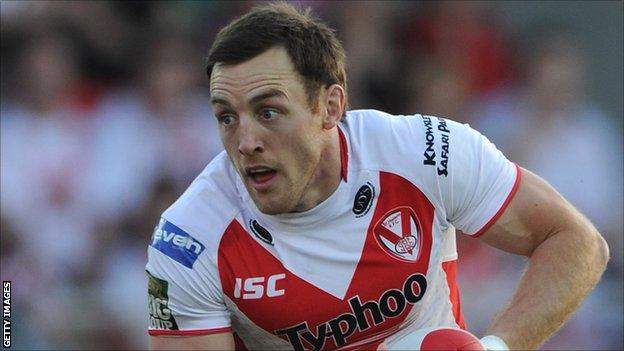 Hooker James Roby wants St Helens to add more quality to their game when they face Widnes in the fourth round of the Challenge Cup on Saturday.

Saints battled through difficult conditions to defeat Castleford 18-12 in their last outing on Monday.

"It was a gutsy performance at Castleford but it was an ugly game to watch," Roby told BBC Radio Merseyside.

"We know what we have to do to get the victory. Hopefully we can go out there and perform like I know we can."

The 26-year-old continued: "With the rain coming down throughout the (Castleford) game, there were a lot of errors and spilled ball.

"From a spectator's point of view, it probably wasn't the most attractive game to watch.

"We did a lot of defending and got the two points, so we can look forward to the Challenge Cup now."

Saints were beaten 18-12 by eventual winners Wigan at the semi-final stage last year.

Mike Rush's side will go into the all-Super League tie against Widnes as strong favourites, given the two clubs' respective positions in the table.

"As a kid growing up, I've got a lot of memories of watching the Challenge Cup," said England international Roby.

"We've played Widnes many times before and they've always been tough games.

"It's a local derby and this year there will be the added thing of them being in Super League."