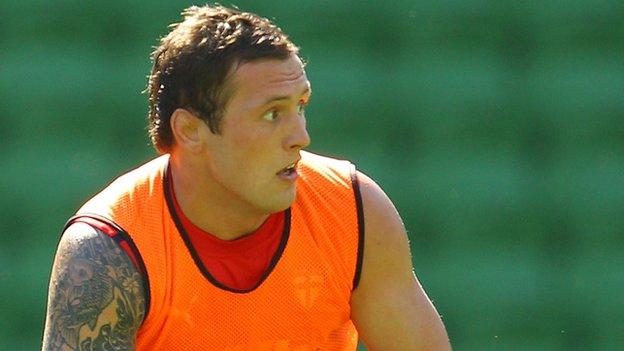 Shaun Lunt's try on his debut helped Leeds to a third successive win with a solid victory over Catalan Dragons.

Louis Anderson struck back for the visitors but Jones-Bishop doubled his tally before the break.

Zak Hardaker and Ryan Bailey crossed for the Rhinos, with Kevin Sinfield adding five goals, but Steve Menzies and Leon Pryce hit back for Dragons.

Lunt, who joined the Rhinos on loan from Huddersfield this week, played the full 80 minutes for the Super League champions and claimed his score when he darted over from two yards in the second half.

The Dragons, who were hoping to draw level with Super League leaders Huddersfield, were forced into a late replacement when Thomas Bosc had to withdraw.

Brent Webb then created Hall's try when he cut through the Catalan defence.

The visitors, who had struggled to make strides against a staunch Rhinos defence, got a foothold in the game with six consecutive sets of tackles.

They eventually broke through when Pryce and Scott Dureau, who landed three goals, worked second row Louis Anderson over.

The hosts struck back swiftly when Carl Ablett sent Jones-Bishop over for a second try in the corner before the break.

Hardaker pounded for his try when Cyril Stacul fumbled Sinfield's kick on the line but the conversion was missed and Menzies pulled a try back on 50 minutes when he combined with Pryce to wrestle his way over.

Lunt darted over from dummy half, after some dreadful defending, and Menzies had a second try disallowed for a double movement before Bailey added Rhinos' sixth.

The Dragons finished with a late consolation through Pryce but they were well beaten by then.

"We were embarrassed [against Catalan Dragons] last year and wanted to turn that around.

"We wanted to be able to hold our heads high against the Catalan fellas.

"It was an important fixture. They're absolutely a good team and they ask so many questions of you.

"We were very aware that, had we not performed and ultimately got the result, it would have dented our confidence.

"We are trying to gain some momentum and hopefully that will be one of many performances for a while."

"I thought Leeds were dominant and they deserved to win.

"We let ourselves down in a few areas that we've prided ourselves on since the start of the season. We were comfortably beaten by a better team."