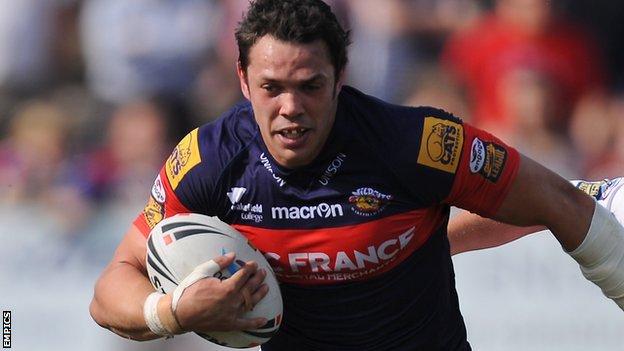 Wakefield held on to see off a strong second-half challenge by Salford.

Frankie Mariano and Peter Fox then went over to give Wildcats a 22-6 lead at the break but Chris Nero's try reduced the deficit soon after the restart.

Two Sykes penalties added to Wakefield's score before Ashley Gibson crossed twice to make it a nervy last few minutes for the Wildcats.

A dominant first half proved to be enough for Wakefield to secure only their second win since the opening day of the season.

Washbrook combined with stand-off Isaac John to allow Collis to cross to open the scoring before Washbrook latched onto Tim Smith's inside pass for Trinity's second try.

The hosts should have gone further ahead but Paul Aiton had a try ruled out for a knock on and attempts by Danny Kirmond and Andy Raleigh were also denied by the officials.

Salford then got on the scoresheet with a breakaway try as Gibson burst upfield before sending Holdsworth over.

Holdsworth then added his first of three goals before Mariano crashed over and an impressive one-handed pass from Collis allowed Fox to score, giving Trinity a 16-point half-time lead.

But the Reds looked a different side after the break, with Nero being put through by Holdsworth to again reduce the deficit.

Sykes then added his fourth and fifth goals before Salford upped the tempo in the last five minutes.

Twice Gibson went over as the Reds looked to be closing in on what had looked at half-time as an unlikely turnaround, but Wakefield held on to secure a much-needed victory.

"The game should have been over at half-time. I thought we played some great football in the first half and should have had at least another two tries which would have made the game dead and buried.

"I thought we held on at the end. For the last 15 minutes we were all over the shop defensively. Maybe that's a team that hasn't won too many games this year.

"We'll take the win and have a look at it in the week. I think we reminded ourselves that, when we do the right thing, we do look like a team that has good football in us."

"I didn't think we were that good in the second half either. I give them credit for showing the courage and tenacity to try to come back into the game but, other than that, I thought we were poor the whole game.

"In the first half, we never got out of our half. They possibly should have been another two or three scores ahead of us.

"We never had one set down on their goal-line and we scored a try that came from our own goal-line. We completed at less than 50% in the first half.

"The frustrating thing is that we had opportunities to win the game but it's our skill level that's let us down."