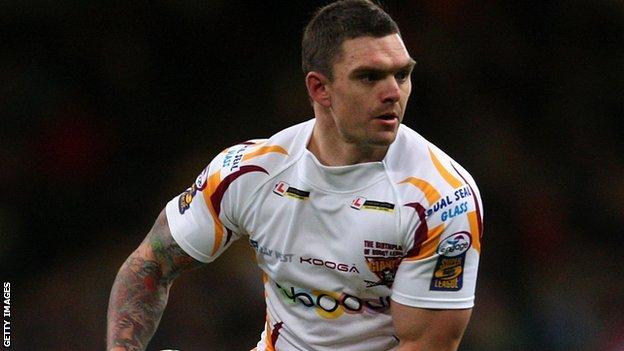 Half-back Danny Brough inspired Huddersfield to their fourth straight Super League success and maintained their place at the top of the table.

The Giants came from behind to lead at half-time, with tries from Jermaine McGillvary and Luke George in response to Michael Platt's score.

The second period belonged to Brough, who scored two penalties and a try as the visitors took control.

The Bulls, who romped to a 36-0 win against the Giants in last season's encounter, came into the game on the back of their own impressive run of three straight wins.

However, Huddersfield were in no mood to relinquish their own good form on a soggy surface.

Danny Addy kicked a penalty to give Bradford the lead after Joe Wardle's infringement, and Mick Potter's side continued to impress, but a moment of magic from Brough brought the visitors back into it.

He darted through a gap in the Bulls line, and when it looked as though he would be swamped by the recovering defence, a swirling crossfield kick picked out McGillvary, who dived over in the corner.

Bradford's forward pack forced a string of sets and, when Shaun Ainscough was held up short of the line, a clever offload found Platt in at the corner for a try.

Both sides traded sets, with the hosts' muddied shirts evoking memories of the winter game, but just as the hooter approached another sparkling play put Huddersfield back in the lead.

Aaron Murphy found George with a pass inside the Giants 20, and the wing took off, leaving Ainscough to struggle in the mud and shaking off Olivier Lima to stride over.

The return of the rain at half-time did nothing to improve the experience for those huddled on Odsal's open terraces, but those in Huddersfield colours could at least cheer Brough's penalty early on in the second period from just inside the Bulls half.

Another Brough penalty followed, and then tempers boiled over when a scuffle emerged at a ruck, it ended with O'Donnell making his way to the sin-bin.

However, Brough, whose kicking had moved the leaders all over the park throughout the afternoon, got the try his performance deserved and added the extras.

"The other team handled the conditions better than us.

"They kicked the ball better than us and kicked at the right time.

"There's more to it than just Danny Brough - the chase was good too and the timing of the kicks and chase has a lot to do with it."

"We started preparing on Wednesday for a game like this. We picked our team around it (the conditions) and made a few positional changes with a bigger pack - probably the biggest pack we've had this season.

"We prepared all week for a tough wet-weather game and Bradford play good wet weather football.

"He coaches them to play very good wet weather football - some people under-rate them but they have a very good pack of forwards who are probably as good as any in the competition.

"We knew it was going to be a hard game and we didn't care how we won - how ugly it was - as long as we came off the field with the two points."