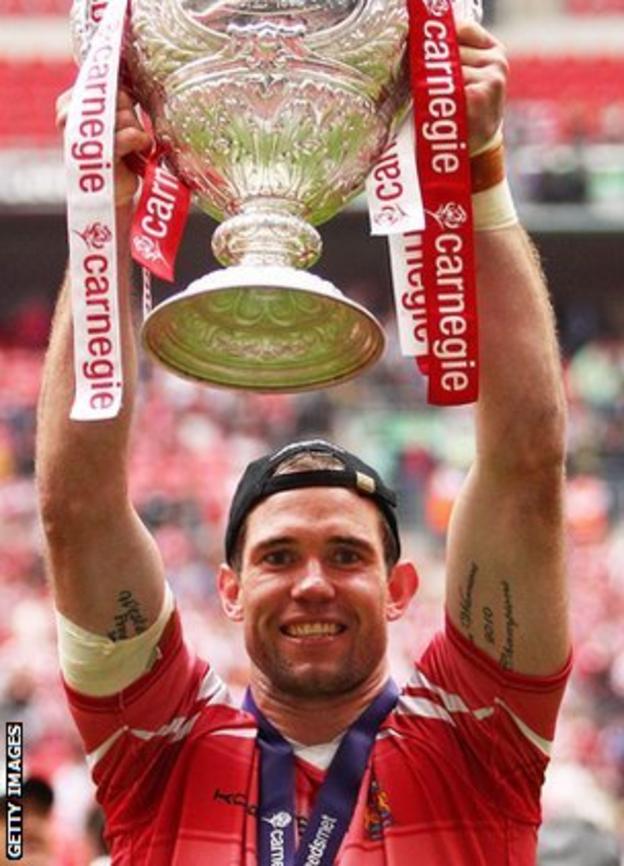 Pat Richards ran in a hat-trick as Wigan thrashed a sorry Hull FC.

The Warriors racked up 28 unanswered points in a dominant first-half display that saw two tries for Richards as well as scores for Gareth Hock, Sam Tomkins and Josh Charnley.

Jamie Ellis and Will Sharp got the hosts on the scoreboard but Charnley ran in his second, Richards got his third and Michael McIlorum went over.

Thomas Leuluai and Brett Finch completed the scoring for Wigan.

Three tries inside the opening 15 minutes gave the Warriors the platform to go on and record an emphatic victory.

Having taken the lead inside two minutes through Richards, the former Man of Steel winner soon doubled the Warriors' advantage, touching down one-handed after rounding opposite number Sharp on the last tackle.

Hull had gone into the match missing a host of first-team players, including their half-back duo of Brett Seymour and Richard Horne.

Forced into making changes once again, Hull looked ill at ease in defence and the manner in which Hock crashed over the line for Wigan's third try despite having a collection of black and whites shirts around him will have worried home coach Peter Gentle.

Hull's impressive start to the season has been built on a robust defence, but, against a fast and direct Wigan outfit, even the meanest defence in the competition were stretched.

Steadying the ship, the introduction of prop Sam Moa alongside the old head of Lee Radford - back out of retirement once again to aid Hull's injury cause - the home side finally found their way into the game and began enjoying an equal share of possession.

However, unlike their opponents, Hull could not find a clinical edge within sight of the Wigan line and the Warriors made them pay for their profligacy with a further two tries inside the closing minutes of the first half.

First full-back Tomkins touched down after chasing his own kick which was directed to the foot of the posts, then Super League's top try scorer Charnley showed his pace in leaving behind England winger Tom Briscoe as he raced for the line.

Any hopes Hull had of a turnaround in fortunes and change to the pattern of the match after the interval lasted just two minutes when, with their first set of the half, Wigan scored again, Richards completing his hat-trick with a trademark catch from a cross-field kick by Finch.

A McIlorum try soon after took Wigan to the 40-point mark but, to their credit, Hull would not lie down and hit back with tries of their own from Ellis and Sharp.

That was as good as it got for Hull, though, and a second try for Charnley followed by late scores for Leuluai and Finch concluded a thoroughly one-sided affair.

"I can't doubt the effort that was there for everyone to see, but sometimes quality just wins out. When their 17 are playing to the best of their ability against the 17 we had out there, quality will always win out.

"It was disappointing the way we played. It is going to happen with a young side, but we are not making excuses - we didn't transfer how we've trained on to the playing field.

"We were not up to it today and that's disappointing."

"I'm very happy. I thought we played really well. The conditions were poor and it was wet on the pitch before we started, but overall our skill level was good.

"We had a short spell in the second half were we didn't run as hard as we could have, but apart from that I'm happy with the result.

"We went a bit soft for 10 minutes, but it is hard to concentrate for 80 minutes when you are running away with it like that. I don't mean to sound arrogant."