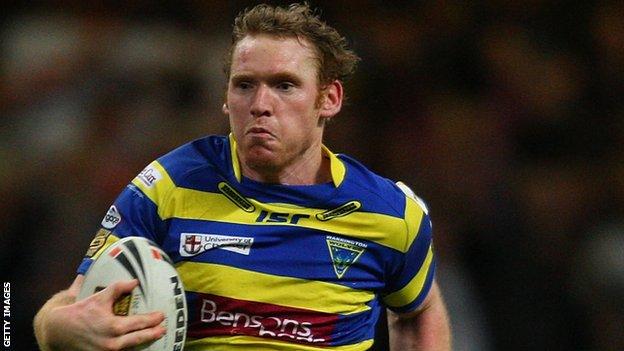 The hosts built up a 38-point lead before the interval thanks to scores from Chris Bridge, Trent Waterhouse, Ryan Atkins and two apiece for Monaghan and Brett Hodgson.

Cas got on the scoreboard thanks to Lee Mitchell but further tries from Atkins and Chris Riley reinforced Warrington's total dominance.

Simon Grix went over late on as they broke the 50-point barrier.

Chase started a three-match ban for a tackle which left Tangi Ropati with a broken jaw in last week's shock cup knockout at Featherstone.

The Tigers suffered an early blow with Nick Youngquest forced off in a daze after only two minutes.

Bridge did not take long to open Warrington's account with a long-range try after taking Lee Briers pass straight from a scrum.

Hodgson's conversion made it 6-0 and he next added the extras to Waterhouse's effort after the Aussie forward outjumped the Cas defence to collect Briers's kick after 13 minutes.

Cas faced an uphill task which became even tougher when Mickey Higham and Briers sent Monaghan crashing through poor defence to open up an 18-0 lead midway through the first half.

Bridge was a constant threat to the Tigers and his smart play sent Monaghan over for a second try in three minutes.

The Tigers did manage to cross the line through Ryan McGoldrick but the try was disallowed by referee Robert Hicks.

It was no surprise when Warrington added a fifth try as Hodgson finished off a slick handling move but missed his second conversion.

Hodgson finished in style two minutes later with Riley's electrifying burst creating the chance for the Aussie to score and land the goal.

Warrington even had time to add another try via Atkins's breakaway to make it 38-0 at the break.

Mitchell, on a season's loan from Warrington, saved a try chasing back to stop Briers early in the second half.

Briers hobbled off after the tackle as a precaution for Saturday's cup tie against Bradford.

Atkins was denied another score by determined defence as Cas showed more fight after the interval.

It took Warrington until the 56th minute to add to their tally with Atkins bagging his second try.

Cas finally breached the Wolves defence when Mitchell plunged over from Danny Orr's short pass, but Warrington finished with a flourish adding late tries from Riley and Grix.

"It was a nice way to start and a good effort to get out of the blocks like that.

"We got the rewards on the scoreboard and it was nice to see it all come together from the off.

"We tried to continue in the same way in the second half but credit to Castleford, they rolled up their sleeves and tackled well but we still managed to create opportunities and score some excellent tries.

"Chris Bridge was explosive and punched some big holes and worked well with Joel Monaghan. Ryan Atkins and Chris Riley also did well together on the right wing."

"We looked shocked after the cup defeat but no excuses, the better team won by a mile.

"We were very hesitant and boring in attack. We lacked enterprise and that's not the way I want to coach.

"We lost Nick Youngquest early on after a hard knock and were disjointed but that's not an excuse.

"We looked nervous and lacked confidence. The challenge for us is to get more enterprise in attack."