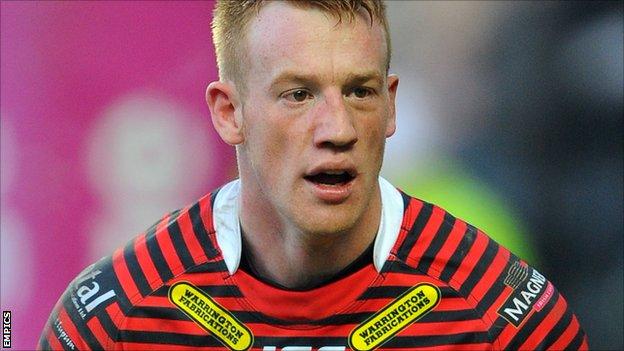 Warrington's Chris Riley has praised centres Chris Bridge and Ryan Atkins for helping him become one of the most prolific try scorers in Super League.

"To have two centres like Ryan Atkins and Chris Bridge here is a winger's dream," the versatile 24-year-old told BBC Radio Merseyside.

"They're two special centres. I think I've walked in for half of my tries."

Riley has crossed 10 times in 12 matches for the Wire this season, three fewer than Wigan's Josh Charnley.

"We've got some exciting centres amongst the younger lads as well," added Riley. "Ryan Shaw and Matty Blythe can slot in straight away so it's not just about those two."

Although he has spent most of his career on the wing, Riley can also play as a full-back and he insists he is comfortable in both positions.

"Everyone knows me as a winger," he continued. "It's not a natural position for me but I enjoy playing out there.

"I've probably played some of my best rugby league on the wing. As long as I'm in that starting 13, that's all that matters."

Warrington, currently third in Super League, host Bradford in the fifth round of the Challenge Cup on Saturday.