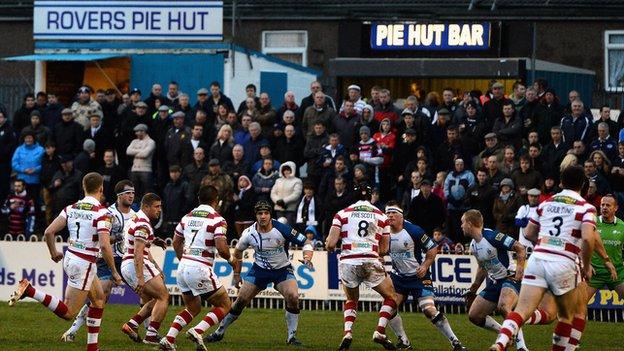 Challenge Cup holders Wigan were given a minor scare by Featherstone Rovers at Post Office Road before booking their place in the quarter-finals.

But the home side were to cross three times themselves through Tommy Saxton, Ian Hardman and Gareth Raynor.

Rovers twice held the first-half lead, only for the Warriors to rally.

Featherstone have only ever beaten Wigan once in six previous Challenge Cup meetings, back in 1952 when Rovers ran out 14-11 winners in the quarter-finals.

But they certainly gave them a good run for their money this time, giving Wigan an uncomfortable night.

This is what the Cup is all about. I hope that lives with Featherstone for many years to come

Fresh from their euphoric 23-16 fourth round victory over Super League neighbours Castleford, Rovers eyed an even bigger scalp on a wet night in West Yorkshire.

And they did half the job by managing to keep a tight rein on danger man Sam Tomkins, whose only contribution to the scoreboard, after a record six tries against North Wales Crusaders in the previous round, was a single conversion.

Featherstone overcame the disappointment of conceding a try to Wigan skipper O'Loughlin after only three minutes to storm into a 10-6 lead thanks to quickfire scores from Tom Saxton and Ian Hardman.

Goulding then levelled before Finn's penalty put the home side back in front.

However, they conceded a try to Hock on the stroke of half-time before losing both tryscorers to injury early in the second half as the Warriors gradually got on top.

Despite Leuluai's try, Rovers remained in the hunt, just one score down after a breakaway try for Raynor on his home debut.

But then Warriors winger Charnley went over for his 16th try of the season on 64 minutes, after which Hock made sure two minutes from the end with his second try of the night.

"I'm unbelievably proud. I thought the try at the end probably did us a disservice. 26-16 would have been a fairer reflection.

"What an effort from minute one to minute 80 from every one of the players. We've got to get a lot of confidence from it.

"We looked at each other last night in the team meeting and we talked about what was possible. We didn't think we could win it but the next time we come up against one of the better teams we'll believe we can do it.

"It was a sensational effort. Defensively, what we did was incredible. We made life really difficult for Wigan."

"I knew it was going to be tough. I'm just glad we're through to the next round. It was a real old-fashioned cup-tie.

"I know what it's like coming here. This is what the Cup is all about. I hope that lives with Featherstone for many years to come. I thought they were outstanding.

"I was uncomfortable. I've watched quite a bit of Featherstone and I knew they could play. And they did a great job on Sam Tomkins. We need to work on ways to counteract that.

"I have to say I was disappointed with the pace of the game. It was allowed to be played at a Championship pace. It was painfully slow and that really disappoints me."