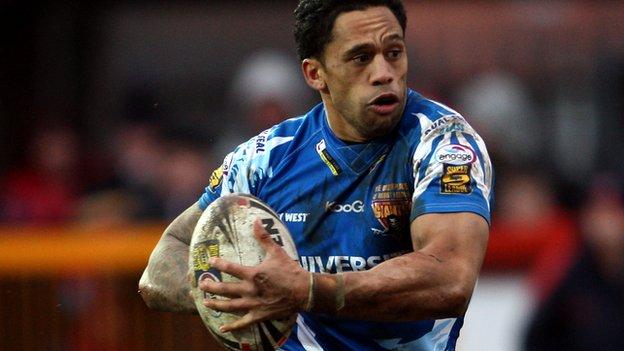 David Faiumu scored one try and made another on his 100th Giants appearance as Huddersfield beat Swinton to cruise into the Challenge Cup quarter-finals.

Danny Brough, Lee Gilmour, Greg Eden, Jason Chan and Scott Grix all crossed in the first half for Huddersfield.

"They challenged our defence on a number of occasions and when the score looked like it was going to blow out they dug in and hung in there.

"The thing with the Cup is that you just want to get your name in the hat and we're in there for Tuesday.

"Sometimes it's not necessarily about the performance in the Cup, it's just about winning.

"We thought we were reasonably solid today and we're happy with what we achieved."

"I thought we had a right dig at them, especially in the second half, and I'm disappointed we didn't score.

"I think it was a try [by Ian Mort], the touch judge gave it, but I don't think we'd have won anyway.

"I'm proud of the players and hopefully we'll learn from what Huddersfield have done to us and build on this for the remainder of the season."