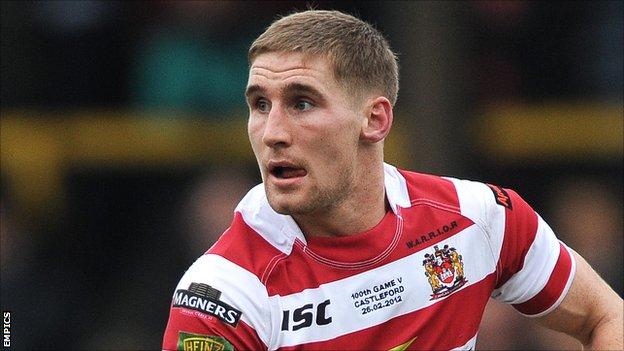 Wigan are determined to retain the Challenge Cup because of the importance of the competition to their supporters, according to full-back Sam Tomkins.

"You play in Super League and the main goal in the Grand Final in October," he told BBC Radio Manchester.

"In the Challenge Cup, it's knockout rugby and it's massively important.

"Everyone in the team and the town are passionate about the Challenge Cup so we know the importance of it. There's no time to have an off-day."

Wigan moved a step closer to another Wembley final, reaching the last eight with a hard-fought victory over Featherstone.

The 23-year-old added: "That's what we're focused on. Every Challenge Cup is another opportunity to get to Wembley.

"We had a great weekend there last year and we all want to experience that again."

Warriors coach Shaun Wane admitted that he was a relieved man to see his side make it through to Tuesday's quarter-final draw, albeit with a gritty display against lower-league opposition.

"I've watched a lot of Featherstone and there's a lot of character in that team," said Wane. "That's what the Cup is all about.

"I want that memory to live in their minds for a long time because they made a great effort. I'm relieved because it was a tough tie."

The Challenge Cup quarter-final draw takes place at 0820 BST on Tuesday, 1 May on BBC Radio 5 live.