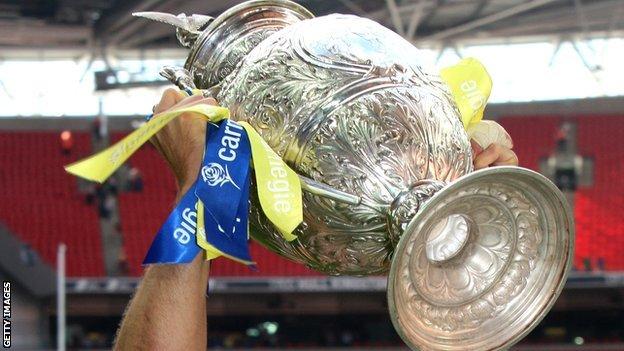 Holders Wigan will be at home to their arch rivals St Helens in the quarter-finals of the Challenge Cup.

The only remaining Championship side, Leigh Centurions, host Super League champions Leeds Rhinos, who have lost in the final for the past two years.

Wigan coach Shaun Wane said after Tuesday's draw: "I'm pleased with that. It's great for the town."

The matches will be played on the weekend of 11-13 May.

Wane added: "If we are going to get to the final we're going to come up against great teams."

St Helens have not failed to reach the semi-finals for 11 years - but Wigan are the only team to beat them in seven matches since caretaker coaches Mike Rush and Keiron Cunningham took charge.

His side secured a 28-10 win over Saints in the Good Friday derby but the Wigan coach is expecting a sterner test in the Cup.

"This is a fresh start," he said. "Jonny Lomax didn't play much game time against us that day. I'm looking forward to a real tough game."

The game at Leigh is a repeat of the 1971 final when Alex Murphy captained and coached the club to a shock win over Leeds.

Discussing the chance to play the Grand Final winners, Leigh coach Paul Rowley said: "They're the world champions so you couldn't ask for a bigger or more attractive game.

"I've got the utmost respect for Leeds and their coach [Brian McDermott]. I like watching Leeds and it will be a privilege to be able to host them.

"It's up to our club and the town to get behind the players and fill the stadium. It is amazing what effect a vocal crowd can have on a team."

Leeds coach McDermott told the club's official website: "This is a dangerous tie for us if we underestimate Leigh. They have got a great set-up there at their new home and they have ambitions to be a Super League club.

"We will treat Leigh with the same respect that we show all Super League opposition and prepare accordingly. I am sure they will be rubbing their hands at the chance to turn over the champions and will perhaps expect us to go there over-confident and slip up."

Catalan Dragons coach Trent Robinson insists his side's 44-16 win over Warrington in the Super League on 9 April will have little bearing on their cup-tie.

He said: "The League game will make no difference at all. As soon as you get to knockout games, past form counts for nothing."