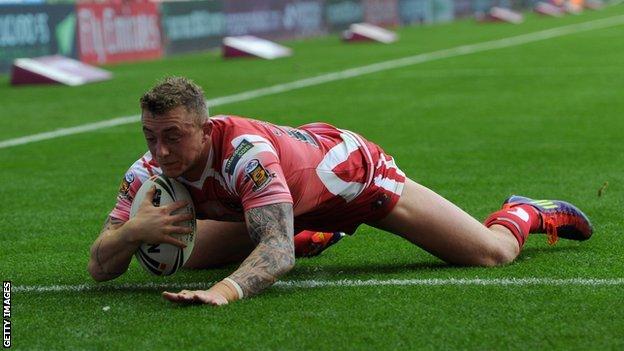 But the game was badly disrupted by referee Phil Bentham being stretchered off with a suspected broken leg.

Charnley claimed his treble, but Wigan were outscored after the break.

Charnley, on duty again due to the absence of regular kicker Pat Richards, landed four of his seven attempts at goal for a 20-point individual haul.

After a 10-minute delay for treatment following his freak collision with visiting Aussie full-back McDonnell, Bentham was taken to Wigan Royal Infirmary, his place being taken by Robert Hicks.

Wigan opened the scoring after just five minutes when Tomkins spied a gap to send Charnley over in the corner before unleashing some magical footwork in a mazy crossfield run to claim the second for hmself.

Wigan's third try quickly followed after 17 minutes but it took an age to be awarded as referee Bentham went down in a heap in the build-up following a collision with McDonnell and did not witness Mossop go in under the posts.

The visitors did get on the score sheet five minutes before the break when Blake Green and Dobson combined to send skipper Galea racing through.

The second half started the same way as the first, with Wigan crossing over the whitewash in a move that again went the full width of the field before Charnley raced in for his hat-trick, taking his overall tally to 18 tries in all competitions.

But Hull KR refused to lie down, scoring again when McDonnell was adjudged to have grounded the ball cleanly despite claims of a double movement.

Wigan hit back when Gelling used all his strength to get the ball down for his second of the night. But Rovers further reduced the deficit inside the last 10 minutes to make the scoreline more flattering, Hodgson collecting a neat offload from Scott Taylor to score at the side of the posts, before Welham cashed in on a Tomkins error.

"There were a few things that happened defensively in the first half that upset me and it got worse in the second half. Them scoring 22 points is very disappointing.

"They won the second half and I don't take kindly to that. It is a dressing room of a losing team because they know our standards are higher than that. I would expect our team, if we got six sets on our own line, to defend them sets it is as simple as that and we did not do that.

"But, on the positive side, we have had a disruptive week with the England boys being away and we've had a few injuries. And overall I am glad to be top of the comp. This is a good win over a full-strength Hull KR team.

"Phil Bentham just fell awkwardly. It is a shame as he is a good bloke. I like him. That is a first for me. I have never seen that happen before."

"It was a very disappointing 25 minutes and everything we trained for during the week we didn't do.

"Unfortunately after 20 minutes it was 5-0 their way and you can't give a class side that many opportunities."