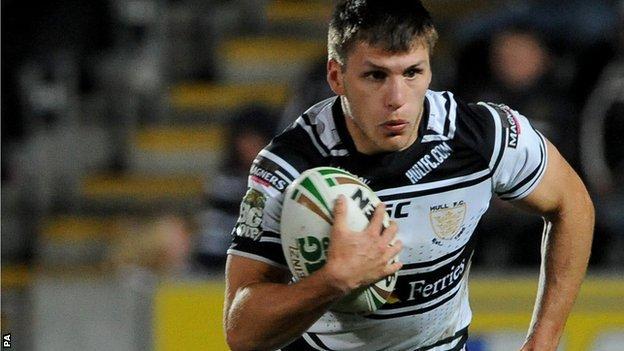 Two tries by Tom Briscoe and 18 Danny Tickle points helped Hull to victory over Leeds in an enthralling match.

The lead changed hands four times inside the first half after Tickle, Will Sharp and Briscoe crossed for the hosts in reply to tries by Ben Jones-Bishop and Carl Ablett.

Briscoe added a spectacular second before Ben Crooks scored and Danny McGuire went over for a consolation.

The hosts produced a solid first half of rugby after Leeds worked the ball wide to Jones-Bishop to put the champions in front after 10 minutes.

The try was unconverted but Tickle added the extras to his own score to ensure the Black and Whites were ahead after quarter of an hour.

The Hull second row thought he had a second moments later when he rose to gather a cross-field kick in goal but the video replay did not clearly show a grounding.

Ablett profited from a rare lapse in Hull's defence in the opening 40 to cruise over and Kevin Sinfield was on target from the tee.

But Peter Gentle's men hit back with quick-fire strikes from Sharp and Briscoe, the second of which was converted, and their robust defensive play ensured Rhinos did not get another sniff of their line before half-time.

Hull spurned a number of early chances after the break but with 50 minutes gone Tickle added a penalty goal to make it 18-10 to the hosts.

Richard Whiting took a spectacular high kick to crash over the line but Jones-Bishop prevented him from grounding the ball.

Leeds were denied a certain Brent Webb try after Jamie Peacock and Lee Smith combined to put the full-back away only for the crucial pass to be ruled forward.

But the visitors' poor discipline was punished again by Tickle and, after Shaun Lunt was narrowly denied a try on the line, Leeds worked Hall into the corner with a simple overlap.

Sinfield missed a difficult conversion but the best try was scored by Briscoe, who shrugged off four tackles and burnt off the covering defenders from halfway.

Tickle converted but 18-year-old Crooks, son of Lee, broke free and reached for the line for his first try for Hull after Whiting robbed the ball off Webb.

Tickle was on song with the kick but McGuire added a quality consolation try, which Sinfield converted.