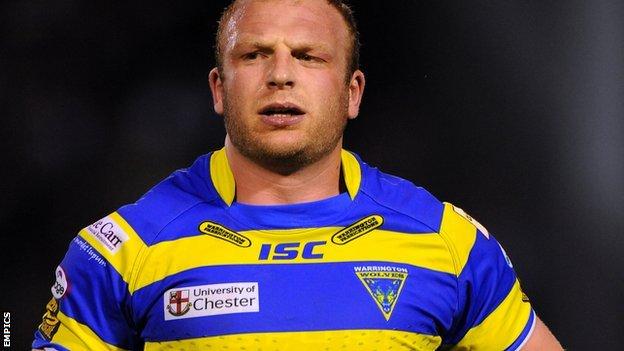 Under-strength Warrington held off a late Salford comeback to move within a point of Super League leaders Wigan.

Two first-half tries for both Rhys Williams and Ashley Gibson saw the sides neck and neck in the first half with only Gareth O'Brien's second conversion separating them.

Daniel Holdsworth and Danny Williams tries came just too late for the Reds.

Wolves coach Tony Smith rested several first-team players ahead of the Challenge Cup quarter-final with Catalan Dragons next weekend and his men showed no signs of trouble when Williams opened the scoring after a smart passing move ended with the winger holding off Holdsworth.

But the hosts were at fault for Gibson's first when O'Brien's pass fell to the Reds centre, who won the race to the line from 60m.

Jodie Broughton came close for the visitors down the left before the play was switched and Luke Patten put Gibson in on the right.

Patten conceded a penalty deep in his side's territory for a knock-on which ended in Williams's second and O'Brien converted for a 12-10 lead at the break.

Broughton was denied again in the second half, this time for a foot in touch, and after Paul Wood broke through Salford's defence Currie grabbed his first Wolves try when he wriggled over.

When Carvell powered over for his score and O'Brien added the extras Warrington were 24-10 ahead and looking comfortable.

Smith changed his line-up with the finish line in sight but Salford gave their hosts a late shock.

Williams then cut the deficit to four points when he grounded a loose ball on the right but Warrington held on.