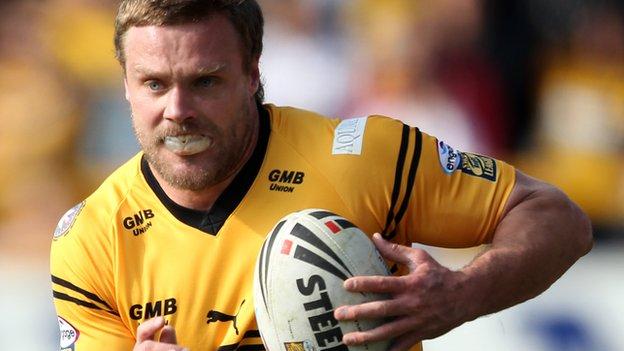 Darryl Clark (2), Brett Ferres and Jordan Thompson also crossed as the Vikings slumped to a sixth league defeat on the trot.

Paddy Flynn and Stefan Marsh scored the two Widnes tries, with Rhys Hanbury landing one conversion and a penalty.

The Tigers had lost their last three matches, including the demoralising Challenge Cup exit to Featherstone.

The gap was just two points at the interval but Youngquest's second-half treble helped overrun Denis Betts' side.

Widnes's chances were not helped by loose forward Simon Finnigan suffering a leg injury in the warm-up, causing him to be stretchered off.

But the one consolation for coach Betts was that, having shipped 262 points in their last five matches, his team were at least competitive for large spells of the game.

Castleford captain Danny Orr was substituted in the second half after being clattered in the back by Widnes prop Ben Cross, who was attempting to latch on to Hanbury's kick.

With stand-off Rangi Chase still suspended, coach Ian Millward is desperate to get scrum-half Orr back onto the field and is helped by the fact that it is the Challenge Cup quarter-finals next weekend and Cas are not in action.

"Defensively, we were very strong today in regard to we didn't look like conceding tries. The try they scored was from a kick and then they scored one with a couple of seconds to go.

"Our kicking game was really poor which didn't give us a chance to get some field positions and build a bit of pressure and get some continuity.

"I thought at times our attack in the first half lacked a bit of patience and it wasn't fluent. But that's what happens when you've had a couple of losses in a row - you lack a little bit of confidence."

"With Rangi out, it's pretty important we get him back on the field. If we'd have played next week, I'd say he'd be out but give us the following week, I think it might give us the possibility."

"I think that paints a picture of our year so far. Little patches of competing and working hard for each other and then just a little fracturing and breaking too easily.

"They were just willing to stick in the tough stuff a little bit longer. Even at about 60 minutes, if we could have got on the scoreboard earlier it might have changed our mindset a little bit.

"We didn't show any real shape or do the simple things of the game enough, which is run hard, play the ball quickly and see what happens on the back of it. Everything was just a little bit too laboured.

"I thought Simon Finnigan might have broken his leg at first but the doctor seems okay with that so he's going to have an X-ray tomorrow and we'll wait and see what happens. It doesn't look great but we'll have to wait and see."