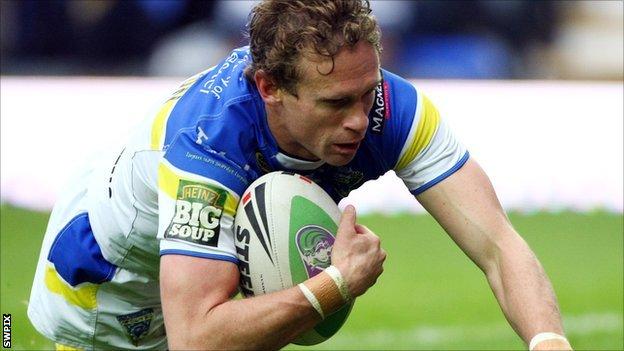 Brett Hodgson inspired Warrington to a third Challenge Cup semi-final in four seasons with a hard-fought victory at Catalan Dragons.

Hodgson scored a try and four goals in the first-half, Joel Monaghan and Chris Riley also scoring, while Lopeni Paea replied for Catalan.

After the break the hosts levelled through Michael Simon and Ben Fisher, before Paul Wood put the Wolves ahead.

Vincent Duport scored for Catalans, but Chris Bridge made sure of progress.

Tony Smith's Wolves side will now face a semi-final date with Huddersfield or London Broncos.

The result also ensured Wire ended the hosts' 100% home record in 2012, and sought revenge on the French club for a comprehensive 44-16 defeat at Stade Gilbert Brutus in April.

Catalan were bidding to match their surprise Challenge Cup final appearance in 2007, against the side that knocked them out in the 2010 semi-finals.

Warrington meanwhile tasted success two seasons running in 2009 and 2010, but were outmuscled by eventual winners Wigan in the quarter final last term - their only Challenge Cup defeat in the last three seasons.

The home side made a confident start, forcing a drop out when Lee Briers was trapped in goal after a Scott Dureau chip through.

However that optimism was shattered when Hodgson and Briers moved the ball from left to right to tee up winger Monaghan in the corner, and Hodgson was on target with the kick.

Monaghan, who ran in a hat-trick at Bradford in the last round, saw another try chance ruled out when he knocked on when bidding to gather Briers' chip-kick.

Catalan were robbed when referee Steve Ganson ruled out a burst from Clint Greenshields, but Paea drew the hosts level when he picked up a fine offload by Ian Henderson to go in under the posts.

Hodgson took the opportunity to kick for goal after a Catalan penalty midway through the half, before slipping through the Dragons defence to score a converted try of his own.

Chris Riley polished off another fine move, Ryan Atkins just slipping the ball out in the tackle to give Warrington a convincing half-time lead.

Trent Robinson's side came out for the second half in bullish mood, and the game opened up with a series of quickfire tries.

Simon made the most of Fisher's ball to score, before Fisher broke from dummy-half to scoot over himself.

Wood then raced in for Warrington, his angled run latching perfectly onto Briers' short pass, again Hodgson was accurate with the conversion, but Duport showed strength to pull Catalan within four points after Dureau pulled his kick wide with eight to play.

However Bridge's interception was enough to end the Catalan fight, sprinting in from 30 metres with six minutes to play.

"We knew what to expect having been on the other end of it, but we prepared well for the game and everything that we planned to do before the game pretty much happened.

"There were some massive differences from when we came at Easter. [With] the flight that we got this time, we had an extra day here and we hadn't played a game three days before.

"We knew what to expect in terms of what game we were in for here. It is different playing the Catalans here compared to when you play them in England."

"I thought we got back into it in the second half. We started off the second half really, really well, just giving away some cheap penalties or not completing after a kick-off was poor.

"We played some really good footy early in the second half and we got straight back on to the front foot, but again our rhythm gets put off by not collecting a kick-off or not completing sets and they got some cheap tries on the back of that."