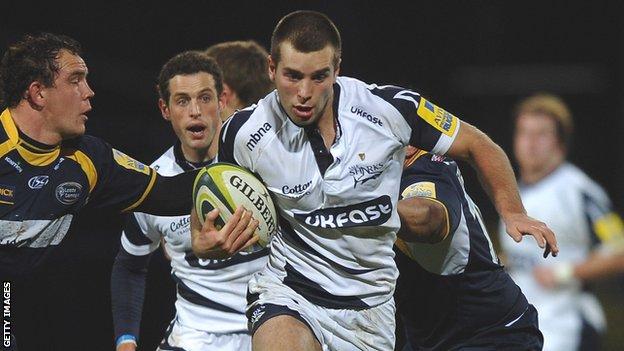 Wigan Warriors have re-signed centre Iain Thornley from Aviva Premiership outfit Sale Sharks until the end of the 2015 season.

Thornley, 20, came through the Warriors ranks before switching codes in 2010.

"This is a great opportunity for me and I am thrilled to be given the chance to return," Thornley told the club's official website.

"It is nice to know that the club continued to follow my progress after my departure."

He added: "It is my aim to pay Wigan back by working hard, earning a place in the side and playing to the best of my ability.

"I am really looking forward to being a part again of this great club. I have enjoyed my time at Sale and wish them well for the future."

And Warriors general manager Kris Radlinski spoke of his pleasure at welcoming the versatile youngster back to the DW Stadium.

"This is good news for the club. We were disappointed that Iain chose to leave us two years ago but understood his reasoning," Radlinski said.

"We made sure it was an amicable departure since we always felt that one day he may wish to return.

"He is a terrific athlete who can play both in the back-row and in the centre. He has made a brave choice in returning to rugby league and the Warriors as he was impressing many people in rugby union."