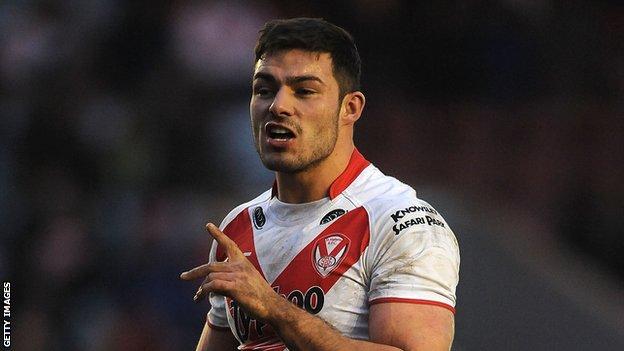 Loose forward Mark Flanagan believes that the Challenge Cup quarter-final against Wigan is the biggest game of St Helens' season.

The former Warriors man says he is "hell-bent" on helping his current employers to victory.

"I can't wait. It will be a great atmosphere at the DW," he told BBC Radio Merseyside.

"I think we will be able to get the win despite that. It's the biggest game of the season so far for us."

I had some good times at Wigan, and I thoroughly enjoyed it. It will be a great afternoon but I will be hell-bent on getting a result for St Helens.

He added: "We're travelling with a lot of confidence. We've played well recently and we'll be going there to win.

"Wigan versus Saints derbies are big enough at the best of times, but being in the Challenge Cup quarter-final adds a little bit of spice."

Flanagan, who played for Wigan between 2007 and 2009, knows that there will be a great atmosphere on Saturday, but believes his team-mates have the ability to overcome that.

"When we play here (Langtree Park) and the fans are loud and getting behind us it can give you an extra lift at times, so it will be the same for Wigan players and Wigan fans.

"Hopefully we can keep that energy between ourselves and keep a positive attitude.

"Derby games give you a little extra boost. It's going to be a great game and none of the boys can wait for it.

"I can't imagine there will be too many points scored; both teams have got good defences.

"It will be a tough game, there will be some heavy collisions and big tackles and all that sort of thing.

"Whichever team defends better and completes their sets will come out on top. I've got full confidence in all our forwards that we can get the job done."