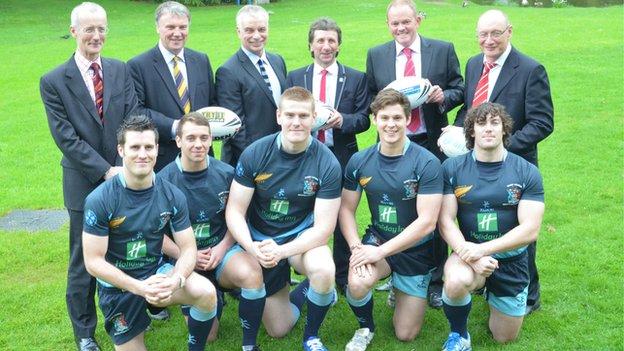 University of Gloucestershire All Golds are to join Championship One in 2013.

They are one of three teams that will enter the semi-professional third tier of rugby league next year, along with Northampton and Hemel Stags.

The All Golds have close links with Super League champions Leeds Rhinos, who have been helping develop the sport in the region.

"This is a rugby county - that's the message," board member Lionel Hurst told BBC Gloucestershire.

"The partnerships are pivotal to the whole situation. Leeds Rhinos provide so much in terms of coaching and we'll be trying to learn from them off the field as well."

The All Golds finished third in the British Universities and Colleges Sport Super 8 League last season and recently launched a junior academy, which now run U14, U16 and U18 squads.

They have recruited former Great Britain captain Brian Noble as their coaching consultant and the ex-Wigan, Bradford and Crusaders boss believes they have the potential to succeed in the league.

"They're five or six rungs further up the ladder than I imagined they ever would be," said Noble.

"I've been really impressed by what's going on and the quality of the people involved.

"From what I've seen already this year, with the calibre of their players, I don't think they're too far away.

"Championship One is going to be a tough challenge for them, however I firmly believe they've got a firm advantage because of their facilities, their personnel and their application."