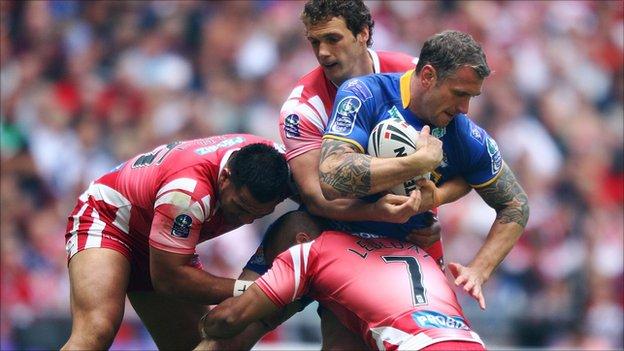 Wigan Warriors will meet Leeds Rhinos in the semi-finals of the Challenge Cup - a repeat of last year's final.

The Rugby Football League have confirmed the tie will be played at Galpharm Stadium, in Huddersfield, on Saturday, 14 July.

In the other semi-final, Warrington will take on Huddersfield in a repeat of the 2009 final at the City of Salford Stadium on Sunday, 15 July.

Both games will kick-off at 17:30 BST and will be shown live on BBC Two.

Wigan beat rivals St Helens on Saturday to progress to the last four, while Rhinos overcame Leigh on Friday night.

Warrington, who lifted the cup in 2009 and 2010, ended Catalan Dragons' 100% home record on Sunday to reach the semi-finals, with the Giants scoring nine tries in a crushing win against London Broncos.