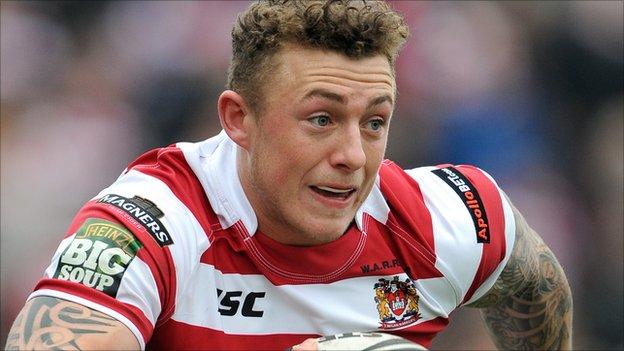 Wigan moved two points clear of Huddersfield Giants at the top of Super League following a hard-fought thriller at the Galpharm Stadium.

Greg Eden touched down for Giants after the break, but Wigan took control with a trio of tries from George Carmont [two] and Liam Farrell.

Jeff Lima topped off the scoring for the visitors with a minute remaining.

Nathan Brown's side, bolstered by the return of David Fa'alogo and Luke George, edged this season's first meeting with Wigan by four points on the season's opening day.

And, at the start of the evening, they were only kept off top spot by Wigan on points difference. But Shaun Wane's Warriors were on an eight-match winning streak in all competitions - and they top the try chart with 83 in 13 league games.

What does this do to the table?

The build-up applied to this battle of the top two was justified by a high-octane start, the hosts almost scoring in their first set.

Danny Brough's chip was gathered by Scott Grix and, with the Wigan line out of position, Leroy Cudjoe had the opportunity to put Jermaine McGillvary in, but he delayed the pass and the ball was knocked on.

The Giants then missed a chance to go ahead when Brough pulled his penalty wide but, from the drop-out, a flowing move engineered by Luke Robinson from right to left this time put McGillvary in for his sixth try of the season.

Wigan responded through Charnley, who finished off a sweeping move in collecting Darrell Goulding's sweet offload, but missed the chance to level with the kick.

The game continued at a frenetic pace with both defences stretched, and it took a slippery run from Wigan full-back Tomkins, slicing through the Giants defence to add to the score.

Dale Ferguson failed to ground the ball for the Giants, and they were punished for profligacy when the swiftest of hands worked Charnley in for his second - and his 18th in Super League this season - just before the half-time hooter.

Tales of the game

A string of tries at the beginning of the second period continued the fireworks in damp conditions.

Eden burst onto a Grix pass to level for Huddersfield, but then blotted his copybook when he spilled a Brett Finch kick that allowed Carmont to restore Wigan's lead.

Wigan then took control when Farrell bundled his way past Eden to score from close in, Tomkins finally nailing the visitors' first conversion to open up a 10-point gap.

Anthony Gelling's knock-on spared the Giants further embarassment but only temporarily as soon after Carmont added to his and Wigan's tally from Gareth Hock's dart and step.

Eden saw a score ruled out by the video ref for a knock-on as he raced through, but Wigan capped off their dominance when prop Lima touched down from Finch's pass.

"I know Josh is not a normal kicker but he needs to kick them. If Pat Richards plays today, we score another 10 points. I was just concerned it was going to cost us. We will always score tries but we need to make sure we kick better than we did today.

"I thought we scored some great tries. We had to concentrate on our defence in the first half, but to score seven tries against a team like Huddersfield - I'm a great admirer of Nathan Brown and the way he coaches - and to keep them to two, I'm fairly satisfied with that.

"The main thing is we wanted to win game more than them. The character and desire made me very happy."

"The opposition were too good for us tonight. They are a very good team and, in a couple of key facets, were better than us. You've got to take your hat off to the opposition.

"I thought a lot of damage was done in the first half, when their kicking game was very good. They strangled us a bit with their ball control and field position.

"The pleasing thing is we still caused them a lot of trouble with minimum field position and not much possession. I thought David Fa'alogo was terrific and Greg Eden was as dangerous as Sam Tomkins in a well-beaten side. He's a wonderfully talented kid and he should take some confidence out of the game."