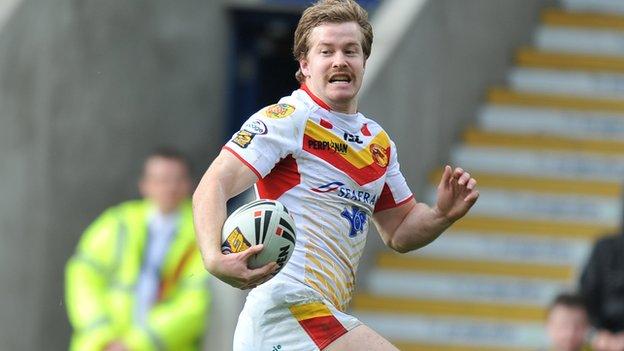 With nine minutes left, the hosts were 34-32 up, but tries from Thomas Bosc and Scott Dureau turned it round.

Widnes, who had skipper Jon Clarke sent to the sin-bin in the second half for a challenge on Dureau, had two players - Lloyd White and Joe Mellor - carried off on a stretcher.

The French side gained an early 14-0 lead after efforts from Greenshields, Pryce and Duport but Marsh and Mellor pulled Widnes within two points.

Anderson then scored the first of his two tries before Hanbury went over with a spectacular effort to leave Widnes trailing 20-18 at half-time.

The hosts took the lead soon after the restart through Dean, but Anderson's second score restored the Dragons' advantage.

Paeu's try gave Catalans a 10-point lead but Widnes, who have only won two out of 14 league matches, went ahead again after Allen and Ah Van crossed.

But there was late drama as Bosc and Dureau ensured a hard-fought win for the Catalans.

"Clarkey was sin-binned for nothing. The touch-judges and referee didn't see anything and it was a poor call after all the players started pushing and shoving.

"We're disappointed with the loss because it was a great team effort.

"We lost Joe Mellor with an ankle injury and Lloyd White did his knee but it's too early to say the extent of the damage.

"It was all hands to the deck after that but we are slowly getting there and just need a bit of luck."

"Widnes were outstanding and pressurised us all over the park.

"They deserved something out of the game. We could see their desperation and they fought tooth and nail.

"They lost a couple of players but can take a lot out of the match."