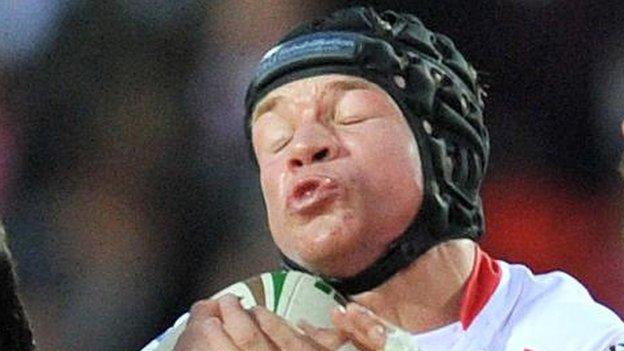 Jonny Lomax weighed in with 13 points as St Helens overran Leeds for a well-earned Super League win at Headingley.

Kevin Sinfield kicked his 3,000th career point as Leeds built an 18-12 lead eight minutes into the second half, with tries from Danny McGuire, Brett Delaney and Jamie Jones-Buchanan.

But Saints, who had scored tries through Lomax and Paul Wellens before the break, hit back with three more.

Lomax, Tommy Makinson and Jon Wilkin all scored to wrap up victory.

Kev's hand inadvertently clocked him around the head. It's potentially dangerous but I don't think there was any intention there. It knocked him out, though, so I don't have any grievance over the penalty

Makinson is virtually certain to miss Sunday's Magic Weekend derby in Manchester after being taken to hospital with concussion following a tangle with Leeds skipper Sinfield, who was put 'on report' by referee Steve Ganson.

But Rhinos coach Brian McDermott is confident that he will not face any action.

But, in truth, this was just as wounding a defeat for the Rhinos.

In his 416th game, Sinfield duly earned his place in rugby league history by adding the extras to take his career tally to 3,001 points.

But Saints were level by the halfway point of the first half when Lomax crossed and, 10 minutes later, the visitors were ahead when James Roby's break helped Wellens go under the posts, Makinson adding his second conversion for a 12-6 lead.

Leeds had it tied up again when Delaney equalised just before half-time, Sinfield's boot doing the rest. And, eight minutes after the break, the Rhinos were back in front through Jones-Buchanan, Sinfield again converting.

Yet, within a minute of the restart, Saints replied when, following Wellens' suspiciously forward pass, Michael Shenton's clever offload allowed Makinson to somehow defy Webb's challenge and ground one-handed as he fell in the corner.

Makinson missed the kick but the visitors again crossed to take the lead just seven minutes later when scrum-half Lomax fed the bursting Sia Soliola, before staying on hand to receive the scoring return pass.

Makinson this time slotted the conversion for a 22-18 lead, but it was to prove his final action of the night after being left flattened by a big hit from Sinfield, which left the young Saints winger spark out and the Leeds skipper awaiting potential RFL action.

Wilkin added another from Roby's stunning low, flat pass, Lomax kicked the goal, bolstered that lead with a penalty and then took the visitors out of sight with a late drop goal.

That restored Saints spirits after last weekend's Challenge Cup quarter-final defeat to arch rivals Wigan, ahead of next weekend's latest Magic Weekend match-up between the two old rivals at the Etihad Stadium.

But there were a few disgruntled noises from the home crowd at a Leeds side who have now shipped 13 tries in this term's two matches against Saints.

And, even allowing for the memory of last year's late heroics, back in eighth in the table, eight points off the pace, McDermott's men look a long way from retaining their title.

"I know everybody else is talking about what happened last year. I don't like being eighth. I want us to come top and finish league leaders.

"It's not helping this group that everybody else is saying it's all right because of what Leeds did last year. This group responded last year to things that were said. It was a desperate, dire situation last year and we saw the best of that group of players.

"I've just questioned them whether they're in the comfort zone, thinking that mythical back end is going to happen for us. It's a very dangerous route to go down."

"I thought defensively we weren't too bad last week and tonight we got our offence right. Little passes stuck and, when we get in a groove and play with a little bit of a tempo, we're a pretty strong team.

"We've not moved away from our principles, we just tried to get players to believe in themselves and I think you saw today we've got a lot of quality players.

"I thought Jonny Lomax and Lance Hohaia were very good for us and Tony Puletua coming back made a difference."