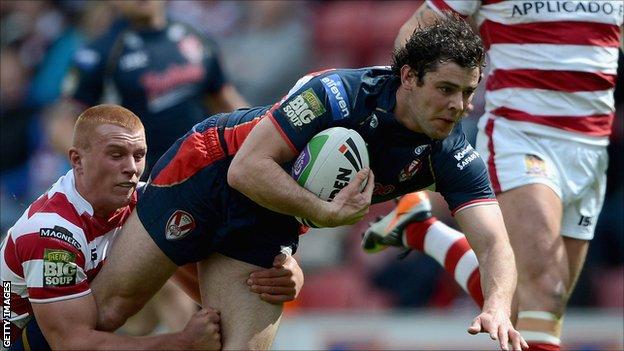 Paul Wellens believes St Helens were made to pay for "silly errors" during their Challenge Cup loss to Wigan.

Wellens crossed over for the first try of the game but Saints did not register any more points and were eventually beaten 18-4 at the DW Stadium.

"When we got in good positions where we felt we could score, we made silly errors," he told BBC Radio Merseyside.

"Credit to Wigan, they defended well. When we meet them again, we'd like to think we can throw a bit more at them."

Wellens continued: "I wouldn't say there were any nerves. Obviously it's a tense atmosphere because it's the Challenge Cup and you know there are no second chances.

"I think we started off the better team and were unfortunate not to score a couple more tries early on.

"It wasn't to be today but we'll lick our wounds and move on."

Interim coach Mike Rush agreed that Saints did not make the most of their chances in their quarter-final tie, commenting: "We just didn't move the ball enough and didn't play with the shape that we wanted.

"Defensively we were good again. Individuals may have been jumping out of the line and trying to solve things themselves, but collectively we kept them in their own half a number of times and made them kick under real pressure.