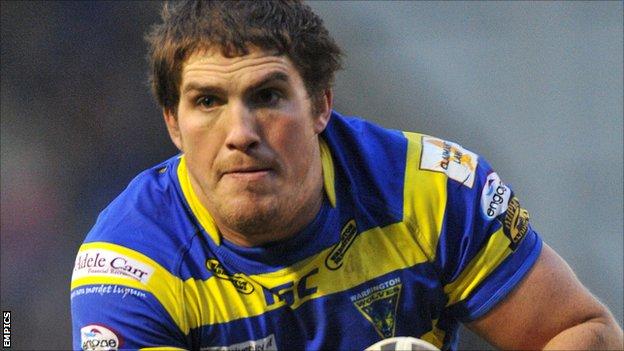 "We came undone last year at the back end but I think we've learned from that," he told BBC Radio Merseyside ahead of Sunday's trip to Wakefield.

"We'll take that into this year and we have the experience behind us."

The 24-year-old continued: "With Leeds winning it last year [after Rhinos finished fifth in the table] it proved that you don't have to be right up there, but there's a trophy there to be won as league leaders.

"That's available again this year and there are three competitions that everyone's fighting for."

Warrington are currently third in Super League, a point behind leaders Wigan and second-placed Huddersfield.

Harrison suffered a knee injury in the first month of the season, which it was feared could keep him out for the rest of the year.

However, he is back in the first-team squad and enjoying the battle for a starting spot.

"I've been lucky to get some game time because it's a very competitive team to get into at the minute," added Harrison.

"Some people can't make the team, which is disappointing for them, but it just shows the strength in depth that we have."