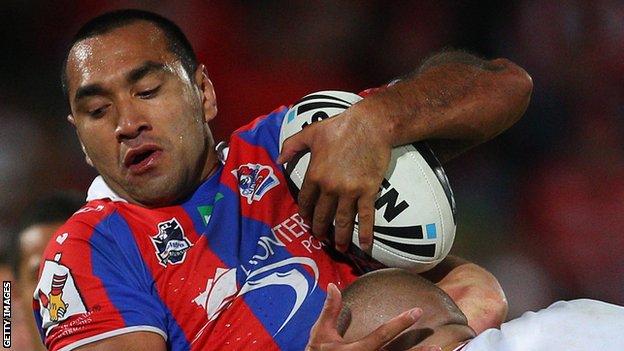 Catalan Dragons have completed the signing of Newcastle Knights back rower Zeb Taia on a three-year contract.

Taia, 27, is their first signing for 2013 and will replace Setaimata Sa, who is switching codes with London Irish.

Dragons coach Trent Robinson was part of the backroom staff at the Knights when Taia joined in 2007.

"I have heard wonderful things about Perpignan and the Dragons. My wife and I are looking forward to the challenge and whatever lies ahead," said Taia.

"The decision was easy in the end to join Catalan Dragons because of my time spent under Trent Robinson at the Knights when he was assistant to Brian Smith."

The New Zealand-born player represented the Kiwis in 2010 and is targeting silverware with the Dragons, who lost to Warrington in the Challenge Cup semi-final last weekend.

"Hopefully I can establish myself as one of Super League's good back rowers and achieve some goals in France by winning a Challenge Cup trophy and a Super League title." he said.

Robinson is looking forward to being reunited with Taia, who has scored 14 tries in 94 appearances for the Knights.

"Zeb is a player that I have enjoyed working with and continued to enjoy watching play," said the Dragons coach.

"His style is aggressive which is attractive for the Catalan Dragons."