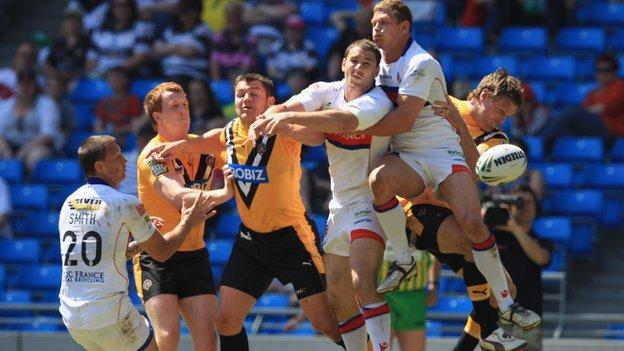 Wakefield kicked off 'Magic Weekend' with a narrow win against local rivals Castleford at the Etihad Stadium.

Both teams came into the game on the back of bruising defeats, Cas having shipped 12 tries against Hull KR last weekend, while Warrington put seven on Wakefield. But there was no sign that either defence had been tightened up in an end-to-end first half.

Cas made a blistering start in the Manchester sunshine, punishing Wakefield indiscipline with a try when Rangi Chase's half-break put centre Thompson in under the posts after two minutes, Dixon converting from close in.

On his return from a three-game ban, Chase was at the heart of much of Castleford's early pressure, but was then at fault when centre Mellars snapped up his loose pass inside the Wakefield 20 to score, Sykes nailing the conversion.

Wakefield then scored again when Danny Kirkmond's drive provided the platform for Mathers to power over, Sykes adding the extras.

But Cas prop Jones then sneaked in from dummy-half to touch down, although Dixon missed the chance to level.

Cas were again masters of their own downfall, conceding field position from a handling error and were punished from the resulting set when Southern collected a grubber that rebounded into his arms off the posts for a simple try.

After Wakefield's Paul Aiton was denied by video referee James Child, Cas wing Youngquest was awarded a try when he pounced on a dangerous kick from England half-back Chase spilled in goal.

And the open nature of the first half continued when Washbrook ran perfectly onto Smith's short pass to run over unopposed, Sykes continuing his 100% record with the boot.

But Ian Millward's Tigers brought themselves within a try of parity in the final minute, when improvised hands from left to right put Holmes in to the side of the posts, Dixon again skewing the kick.

The first score of the second period was one to forget for Castleford winger Youngquest.

Deceived by an awkwardly bouncing kick, Peter Fox was the lucky recipient via Dean Collis to score for Wakefield in the corner, although this time Sykes was unable to apply the finishing touch.

Ben Cockayne was then halted by a huge tackle from covering full-back Richard Owen following a marvellous individual run, and Cas then reduced the deficit when Orr profited from a powerful drive by Paul Jackson to run in wide of the left-hand post.

With time ticking down, Cas almost produced a moment of magic to snatch victory through prop Nathan Massey but they were denied a try by an infringement earlier in the move.

Instead, Wakefield had the final say when Smith stepped a tired Tigers defence to burst over.

"Great victory. We survived one or two scary moments but it's a big win in difficult conditions.

"The score blew out in the first half and fatigue was a big element. But we gave the supporters their money's worth.

"We saw within our side that the lads were certainly tiring, and we had to manage our interchanges."

"Our forwards were outstanding, played tough and won the battle, but we couldn't compliment it out wide, with our kicking game and execution.

"The weather was always going to indicate lots of tries and it was close, but not close enough. At 28-26, we had to nail it and they were there for the taking.

"Rangi Chase was a mixture, good and bad. There's improvement there. We had the ball, but what we did with it was frustrating. That's why we got beat."