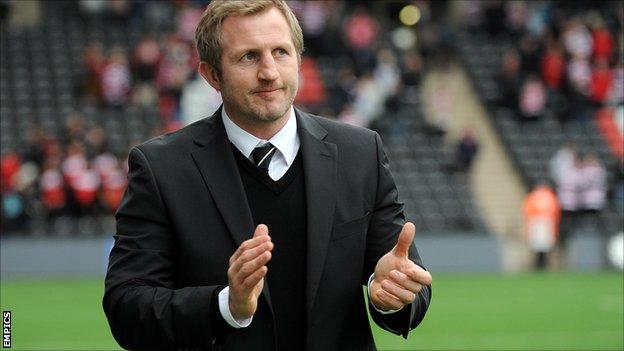 Widnes coach Denis Betts has praised his team for their "energy and desire" during their on Sunday.

Vikings conceded two tries in the final 10 minutes and eight in all as the French side condemned them to a sixth straight Super League loss.

"There is pride in defeat but there are things that we can do so much better," Betts told BBC Radio Merseyside.

"They still scored 40 points and that's the disappointing side of it."

Betts thought one of the turning points of the game was in the second half, when Widnes skipper Jon Clarke was sent to the sin-bin following an incident with Scott Dureau.

"There was nothing in it," said Betts. "Scott Dureau threw himself on the floor.

"The referee and the linesman haven't seen it and all they've done is react to the players charging after Jon Clarke.

"It was a big call from the referee when he didn't really know what had happened.

"He's made a decision on an assumption and it's taken us down to 12 men, which was a painful part of the game for us."

Lloyd White (knee) and Joe Mellor (ankle) were both injured during Sunday's game, leaving Betts with a selection headache ahead of Widnes' clash with Warrington at the Magic Weekend in Manchester on Saturday.