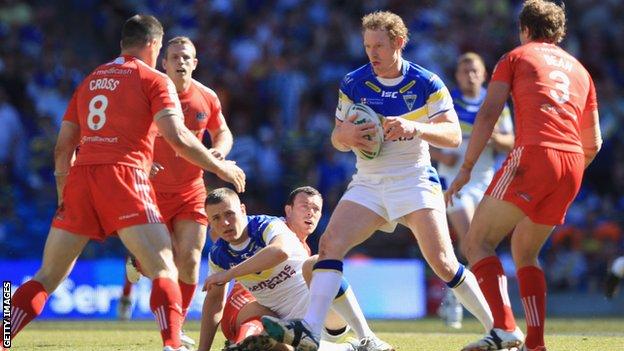 Widnes's only consolation was an early second-half try from forward Kurt Haggerty.

And a Widnes mistake led to Warrington's opening score inside two minutes.

Warrington's advantage was doubled soon afterwards when Carvell went in under the posts.

It was becoming a Magic Weekend debut to forget for Widnes, who shipped a third try on 12 minutes when Monaghan raced onto a grubber kick from Briers to touch down in the corner, although O'Brien was unable to add the extra two points.

Despite Warrington's early dominance, Widnes did have their moments and were almost rewarded when Stefan Marsh appealed for a try, only to be denied by a resolute Warrington defence and the intervention of video referee Ben Thaler.

But, from the restart, Widnes conceded a penalty inside their own half and centre Atkins broke clear to score his 15th Super League try this season.

O'Brien's successful conversion attempt was taken following a cacophony of cheers as veteran Adrian Morley entered the fray, fit again after the neck injury that had kept him out of action since early April.

And the Warrington tries kept on coming. Monaghan claimed a high ball above Widnes winger Patrick Ah Van to claim his second and, a minute later, full-back Ratchford danced past four defenders before setting up Monaghan.

A weary Widnes side were being torn apart, showing why they had chosen to announce the signing of Huddersfield captain Kevin Brown for next season during the match. And try number seven of the afternoon was soon to follow.

Scrum-half Rhys Hanbury was dispossessed just inside his own half and Blythe gladly picked up the loose ball to score.

Frustration was clearly evident for the Vikings skipper, former Warrington man Jon Clarke, who dumped Blythe to the ground and was lucky to escape a sin-binning.

Warrington went in 40-0 ahead at the interval, but it was the Widnes fans who finally had something to cheer at the start of the second half.

Second-row Haggerty took a quick-tap penalty and held off the challenge of Ratchford to dart over, although Rhys Hanbury was unable to add the extras.

Denis Betts' half-time words had obviously had an effect on his players, who posed much more of an attacking threat. But they were made to pay for handling errors from Willie Isa, who twice fumbled in sight of the try line.

On the hour mark, Monaghan slipped in for his fourth from an inventive offload by Blythe, who sidestepped his man to claim a hat-trick of his own after Widnes had kicked out on the full from the restart.

And the try count reached double figures when the impressive Ratchford got the score his performance deserved, bursting through a tiring Vikings defence, O'Brien failing with the boot for only the second time.

Teenager Currie then raced clear to score only his second senior try for Warrington.

And Monaghan's opportunist effort in the corner after the final hooter ensured a new Magic Weekend record for the biggest margin of victory, beating Wire's own 68-16 slaughter of Salford in 2010.

"Joel Monaghan played exceptionally well and showed his class. And Matty Blythe had a great day as well. They were red hot, those two.

"On other days, we've seen the Chris Riley-Ryan Atkins combination work, but on this occasion it was the Blythe-Monaghan combination that got the spoils.

"I'm pleased with the way we went about it, we prepared well and we got what we deserved out of it."

"My 19-man selection was pretty easy this week because I only had 19 men.

"We needed a start, we needed to get going, we made the first error and we got caught in the headlights a little bit. It's all about strength of character and the change doesn't happen overnight. It takes time.

"You can look at the positives and there didn't seem to be many, but there was a 20-minute period in the second half where I thought we got some field position and looked all right."