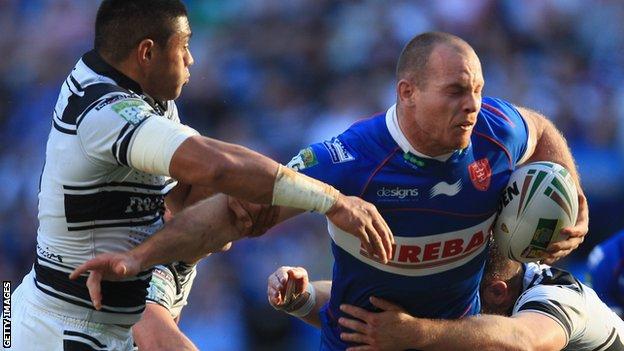 David Hodgson stole all the points for Hull KR with a last-gasp try to stun rivals Hull FC at the Etihad Stadium.

KR were trailing by two late on - despite tries from Hodgson, Sam Latus and Michael Dobson - as Tony Martin and Jordan Turner ran in Hull's points.

But Hodgson crossed with seconds to play to ensure a dramatic Rovers win.

Danny Tickle kicked all five of Hull's conversions, while Hall and Dobson contributed to a four from five success rate.

With this clash between the local foes billed as the final encounter of the 'Magic Weekend' opening day, both sets of supporters remained in fine voice as the shadows cascaded.

Hull KR came into the game on the back of a 12-try 70-12 demolition of Castleford, while Hull FC scraped a 14-12 victory against London Broncos last weekend

The first few sets passed without incident, both full-backs handling the early kicking well, and it seemed it was going to take a moment of quality to open up a tight game.

Hull's Turner did his best but could not quite finish off a left-to-right move in the corner following Tom Briscoe's 40 metre run, and Will Sharp was denied similarly in an incident that earned Rovers pivot Dobson a yellow card and a spell in the sin-bin.

Half-back Seymour made the most of the resulting play, darting onto a pass from Danny Houghton to score the game's first points, and goalkicking second-row Tickle found the gap to add two more.

Yet Rovers found their way back into the match even without the talismanic Dobson, as Green's pass found Hall, who took Hull on the outside, picking the gap with precision for an easy score which he converted himself.

And with the Robins back to full-strength, Australian full-back McDonnell took a delightful inside ball from Hall to give Rovers the lead for the first time in the match while Dobson returned to kicking duties with his first points.

With momentum starting to edge their way, Rovers poured forward and Green's 40-20 handed them superb field position, but a huge hit from Briscoe put Latus in touch to snuff out the threat.

The Hull response was immediate, as Briscoe's carry from deep drove straight through a gap in the Rovers line, and Horne's supporting run was picked out perfectly to bring the Airlie Birds back into play, Tickle swinging his boot to perfection for the extras.

Referee Steve Ganson penalised Rovers for not being square at the play-the-ball and Hull made them pay for the mistake.

Russell almost forced his way over but when he was held-up, Hull maintained the pressure and eventually when the ball was floated up by Seymour, Manu latched onto the ball to score.

Rovers almost went over moments after the break, but for a remarkable steal from Turner on Clinton behind the line. However, they eventually pulled within two after a string of penalties led to Dobson's fine cut out ball putting in Hodgson in the left corner.

Dobson's missed conversion ensured Hull still led, and they opened up a further gap when Martin collected a pass from Turner after Seymour's sniping, and blasted through to notch the Black and Whites' fourth try.

Tickle's fine kick from out on the left scraped over to give Rovers a bigger deficit to address.

Dobson did his best but where Rovers failed to take their chances, Hull were clinical, and Turner picked up his sixth of the season when he collected a Seymour chip under pressure to touchdown.

Latus' dive over in the corner again dragged Rovers back into the match, but the try came with FC centre Martin down injured, and the player was withdrawn with a painful-looking leg injury.

There was still time for some late drama as Rovers clawed within two, though there was a hint of forward pass about Dobson's converted try with Rhys Lovegrove's pass the subject of Hull scrutiny.

And with Hull believing the game was won, Hodgson's second try of the game stunned the Black and Whites, and handed Robins' fans a chance to celebrate at the death.

"It doesn't get any better - it was emotional, very exciting and exhilarating to win a game like that.

"As a player you dream about that scoring a last minute try to win the game, and when it got to 30-16 I thought we had to knuckle down here, we had let ourselves down but in the last 15 minutes everything we did turned to gold.

"The derby is special, just the sheer passion of our supporters is incredible and the situation is comparable to ground finals, it was great seeing the fans behind the goal."

"I'm disappointed, we built up a lead that most teams would have won off, but we let it go in the last 15 minutes.

"We were off our feet, we only had 12 sets in the second half and I would have liked to see the tackle count.

"I would expect an apology from Steve Ganson (for the Dobson try) I don't know whether they do that over here, but I expect him to call me up and say 'I got that one wrong'."