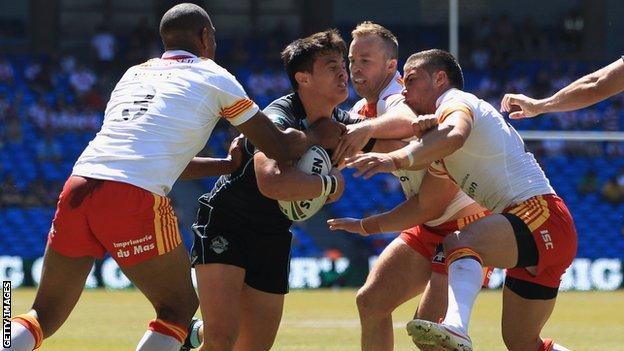 Catalan fought off a spirited second-half comeback by London Broncos to move up to third in Super League.

First half scores from Lopini Paea, Leon Pryce (two) and Remi Casty, all converted by Scott Dureau, gave the French side a 24-0 half-time lead.

London came back after the interval and Antonio Kaufusi, Ben Bolger and Chad Randall crossed to give them hope.

But it was not to be for Broncos as Casty, Steve Menzies and Jamal Fakir all went over to secure victory.

Broncos were looking for just their third Super League victory of the season and their first since hammering Wakefield 36-0 in March.

Despite being the first game on in the second day of the Magic Weekend programme, the match was attended by an encouragingly-sized crowd in the Etihad, as many fans arrived early to enjoy the excellent conditions.

The Perpignan side had run in seven tries in a comprehensive 36-18 victory in London last month but had to weather early pressure from the strugglers before taking the lead when Paea crashed over from close in following Dureau's neat hand off.

Before Broncos had a chance to recover they were further behind, Pryce waltzing past a static defence after Catalans had regained possession from a London error.

The two sides were separated by 16 points at kick off and it was becoming increasingly apparent why, prop Casty barging in after poor defence from an up and under by Pryce.

Pryce effectively put the game beyond Rob Powell's side after he finished between the posts following Steve Menzies' quick hands on Dureau's kick into space.

With the first attack of the second period, Kaufusi got London on the scoreboard, going over from close in from Chad Randall's pass.

The arrears were further reduced soon after thanks to Bolger's score from Mark Bryant's good hands under pressure.

Improbably, Randall then dived over from dummy half, after Catalans had forward Jason Baitieri sin-binned for a late challenge on Craig Gower, and Shane Rodney kicked his third conversion to reduce the deficit to 24-18.

Powell's side, winless since the Challenge Cup victory over Batley on 29 April, were in the ascendency but, before they could mount a further attack to level the match, Casty powerfully forced his way across from the 10 to give Trent Robinson's side much needed breathing space once more.

That score changed the complexion of the game and veteran Menzies finished off despite being under heavy pressure from two Broncos players as the French side ran in their sixth try.

With the Broncos looking deflated it was Fakir who grabbed perhaps the best try of the day to round off the win, diving over after an incisive attack cut through the London backline.

Catalans' victory means they close the gap on current leaders Warrington to just one point, having played one game less.

"We defended well in the first half but we lost a bit of that in the second and that was disappointing.

"I thought that Jason Baitieri hit Gower late but I think it's a poor rule that it's an automatic sin bin. It was silly but not dangerous.

"Jamal Fakir has been in good form all season and it looks like a groin injury. How bad it is, I don't know.

"Our front row group were outstanding. I thought Scott Dureau and Leon Pryce played well but I always judge them slightly harder because of their ability."

"It was disappointing to get caught out the way we did when we'd come back so well.

"At half-time we talked about pride and fighting back. We know Catalans are capable of putting 60 or 70 points up.

"We just need to keep working hard and keep believing in what we're trying to achieve here."