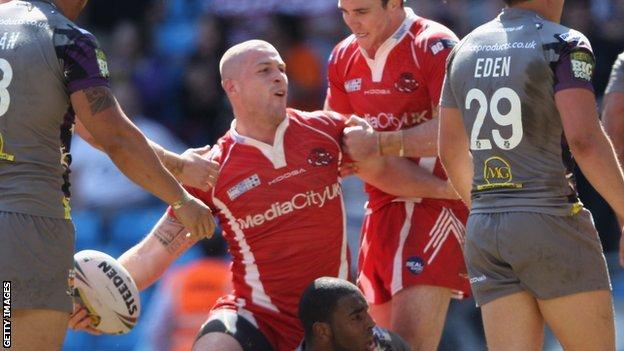 Salford edged a thrilling 13-try clash against Huddersfield to end a run of six Super League games without a win.

Eorl Crabtree's brace put Giants ahead, before Broughton and two from Sidlow either side of a Brough try sealed it.

Salford made the early running and Australian centre Moon made that pressure count when he touched down following Broughton's unorthodox mid-air touch back. Holdsworth, whose missed kick cost the Reds a win in last weekend's draw with Bradford, made sure with his conversion.

However, Giants, heavily beaten at Wigan in their last outing, forced a quick response when skipper Brown broke from dummy-half to slip over, although prolific kicker Brough dragged his kick wide.

Luke George's knock-on denied Giants one of the tries of the season after a flowing move, but he and Wardle combined soon after with a thrilling break to supply Brough for a try that the stand-off converted.

Giants had a try chalked off for a knock on after another probing Brough chip, but Salford then worked the ball from right to left through the halves and Luke Patten slipped the ball to Moon unopposed for his second score.

That seemed to reignite the Reds and when Patten danced his way across the line and fed Gleeson, the centre shrugged off the challenges of Brough and George to extend their lead.

Salford's victory against Huddersfield was their first in the Super League since March 25. Their league run since then has been...

Phil Veivers' side were in again before the break. Huddersfield gave away a penalty when George held on to Gleeson in the tackle and Salford executed the play with swift hands through to Broughton, who dived in at the corner.

Huddersfield completed the first-half scoring when Lawrence finished off a Grix break and Brough was successful with the kick to close within six points.

It seemed that try swung momentum the Giants way and within minutes Leroy Cudjoe looked to be in for a try when Brough and Grix worked him in, but referee Tim Roby pulled play back for offside.

Brough then chose an inside ball to Robinson when Lawrence looked the better option on the blindside.

But they did respond when Faiumu bulldozed his way inside the Salford 10, and, when the ball worked out to Robinson, he found prop Crabtree, who forced his way over.

Crabtree's power was proving too much for Salford's defence, and he again crossed from close in, after a Faiumu drive had provided field position to give Nathan Brown's side the lead.

Salford were unbowed and were rewarded with a try for their perseverance when Moon maintained his balance under pressure and offloaded to Broughton who scooted in for his second to bring the scores within two as Holdsworth skewed his goal attempt.

Salford again went ahead when Lee Jewitt's drive at the Giants' line was held-up and Sidlow slipped in off Stuart Howarth's neat ball.

But Giants are one of Super League's top try scorers and their quality showed when a dummy half break from Jason Chan put a full-pace Brough in under the post, and he stepped up to convert.

Salford's seventh try owed much to the brute strength of Sidlow, who crossed for a second time to gain open up the four-point gap with three minutes to play.

Jason Chan broke through the line to give Giants fans hope, but when his pass went loose, optimism evaporated to leave the play-off hopefuls without a Super League win in three.

"It was a hot game, pretty intense, and there were plenty of tries scored but in the end we got the two points and we're happy.

"There was a lot of good attack from both sides, but I don't think the defence was that good on both sides.

"Credit to Salford, they beat us fair and square. We were really disappointed the way we defended and we knew we could score points but you have to defend and we weren't up to scratch.

"We're really disappointed with soft tries and lazy things really like penalties that put them in the right positions.

"We've got to work hard on our own games, but we're not in a bad spot."