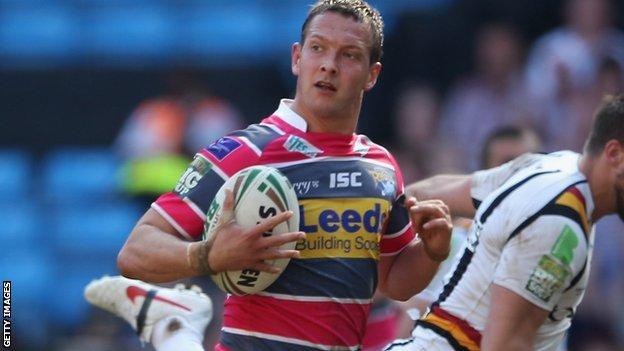 McGuire's first half hat-trick was matched by efforts from Elliott Whitehead, Ben Jeffries and Matt Diskin to leave it at 18-18 at half-time.

McGuire went over twice more and Ablett rounded off a quick attack to put the game beyond the Bulls.

Elliott Kear crashed over late on to complete the victory that moves Leeds up to seventh in the league table.

The Rhinos were looking to bounce back after a disappointing home defeat by St Helens on Monday and also had revenge in mind having lost 12-4 at Odsal in April.

That match had seen a bumper crowd turn out to support the Bulls in a match that had been billed at the time as possibly their last ever, such was the severity of their financial problems.

Despite issues surrounding the fiscal future of Mick Potter's team still being unclear, Bradford headed into Sunday's match with their local rivals occupying the final play-off spot, while Brian McDermott's side started the game sitting one point and one place behind.

McGuire gave Leeds a dream start when he darted over from close in early on after they switched the play to excellent effect.

The lead was short-lived though as Whitehead just about forced his way over the line following a quick Bulls reset inside the 10-metre line, the try eventually being given after deliberation by the video referee

Jeffries, a try-scorer in the Bulls win over Leeds earlier this season, showed good feet to get through a gap in the Rhinos defence and put his side into the lead.

Things got worse for McDermott's side when Jamie Peacock failed to deal with an up and under from Luke Gale and Diskin dived on to the loose ball on the Rhinos goal line.

Leeds were back within one score in controversial circumstances, McGuire latching in to Webb's pass and despite the ball appearing to have gone forward the try was awarded.

If that try owed more than a little to good fortune, there was nothing fortuitous about McGuire's third. Rob Burrow showed wonderful skill to weave through the Bulls defence before off-loading to McGuire, who had the simple task of running in unchallenged from the 40-metre line.

Another great breakaway, this time led by Sinfield, put Leeds back in front. The Rhinos skipper bamboozled two Bulls players with a clever dummy before feeding McGuire to run in once more.

Ablett rounded off a quick Leeds breakaway by stepping inside two challenges and going over from close in before a field goal from Sinfield put the game beyond Bradford.

Leeds further showcased their authority when McGuire sprinted over from another Webb pass for his fifth try, to match the haul of Warrington Joel Monaghan in his side's win over Widnes on Saturday.

Kear's late try, when he did well to hold off three Leeds tackles to touch down, was scant consolation at the end of a hard-fought match.

"That wasn't the reaction I wanted after Monday's defeat. We made too many bad decisions.

"We defended well in parts in the second half but I'm not going to be punching the air about that.

"We've needed individual brilliance to win us the match. I don't think anyone grabbed the game by the scruff of the neck."

"We didn't finishour sets off and we lost some shape with the injuries we picked up.

"Matt Diskin has injured his shoulder and gone straight to hospital. That could be quite a serious one.

"It was extreme conditions out there and I think they handled them very well.

"It was an entertaining game for the fans but not the right scoreline for us."