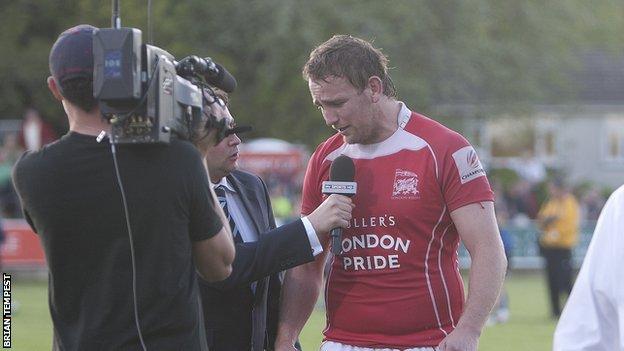 Harrow West MP Gareth Thomas has appealed for the Rugby Football Union to reconsider the decision that London Welsh are not eligible for promotion.

He has signed a commons motion in support of the Exiles, who beat Cornish Pirates in the first leg of the Championship final on Wednesday.

An RFU report found that the club had not satisfied the minimum standards criteria for entry into the top flight.

I do not think London Welsh have been properly treated

"I hope it will reconsider London Welsh's application," said Thomas.

"I hope that members of the RFU board will come to that stadium [Oxford United's Kassam Stadium] to see just how well that ground could house Premiership rugby next year."

The Exiles will play the second leg of their play-off final in Oxford next week and had hoped to play Premiership games at the same venue.

They were forced to look for alternate venues with a capacity over 10,000 because their home ground, Old Deer Park, is too small under the Premiership's regulations.

Thomas, speaking in the House of Commons, continued: "I do not think London Welsh have been properly treated.

"I raise this issue in the House today... to encourage the RFU to publish the full details of its assessment and how it reached the decision to reject London Welsh's application for the Premiership, so that London Welsh has all the facts in front of it as it prepares its case for appeal."