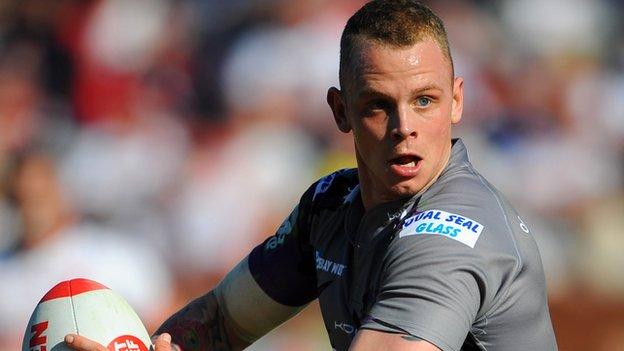 Widnes have pulled off their first major signing since returning to Super League by capturing Huddersfield Giants skipper Kevin Brown for next season.

St Helens-born Brown, who made his Super League debut as a Wigan player, will move back to Merseyside for an undisclosed fee on a four-year deal.

"To secure such a quality player is a massive coup," said coach Denis Betts. "He's an exceptional signing for the club.

"Given the fact there is a transfer fee involved is another indication of where we are going and what we are trying to do.

Former Wigan favourite Betts first coached England international stand-off Brown in his days as an Academy coach with the Warriors.

"Kevin has always had the ability and charisma needed to be an outstanding player," added Betts.

"From those early days, he's gone on to play his part in plenty of big games at both club and international level and he will bring a vast wealth of experience and high quality traits with him.

"As he's proven in recent seasons, he is also a leader of men and has taken the captain's responsibility at Huddersfield with ease.

"What we lack is composure, leadership and someone on the field who can control a game," added Betts' speaking after his side's 68-4 Magic Weekend mauling by Warrington in Manchester.

"That's why we went after Kevin. He's got the best years of his career ahead of him.

"This is a three-year plan. We'll be moving on other players and we'll be looking at strengthening our squad with higher-quality players."

Giants managing director Richard Thewlis said: "Kevin Brown has been and continues to be a great player and leader.

"He has given us wonderful service and I am sure will be wanting to leave us at the end of the year on a high having helped us achieve our goals this season."

Brown will not be the only high profile end-of-season departure at the Galpharm, coach Nathan Brown having also decided to head west to Merseyside by agreeing to become the new coach at St Helens.