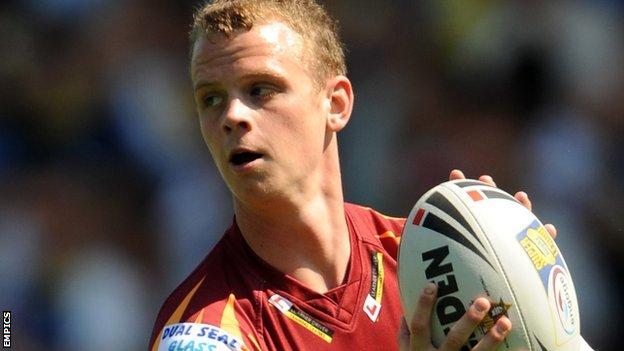 Huddersfield Giants captain Kevin Brown has said he will move to Widnes next season to be closer to his family.

"My nan had cancer last year and I've just had a kid," the 27-year-old told BBC Radio Merseyside. "I realised how important family are.

"This opportunity came up and I couldn't turn it down. A couple of clubs came in and obviously Widnes was the one that I chose."

It's a big wrench to leave, but sometimes in life things aren't easy and you have to make tough choices

He continued: "I know what the coach, Denis Betts, is all about because I've worked with him before.

"At the moment they're struggling a bit on the field, but I'm looking forward to getting there, working hard and seeing if we can improve as a club."

Brown, who scored a try for Huddersfield in their narrow defeat to Salford at the Etihad Stadium on Sunday, has assured Giants fans that he will be giving his all for the club for the remainder of the campaign.

"My main focus is on the Giants and it will be for the rest of the year," he added.

"It's a big wrench to leave, but sometimes in life things aren't easy and you have to make tough choices.

"I'll be sad to leave and my main priority is leaving on a high."