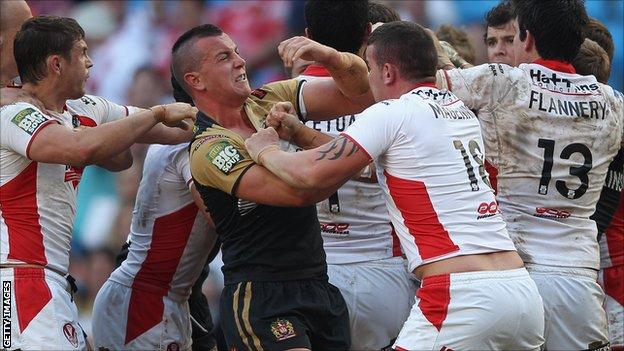 Four players have been suspended by the Rugby Football League following a mass brawl during Wigan's 42-16 win over St Helens at the Etihad Stadium on Sunday.

Saints' Shaun Magennis was handed a three-match suspension and fined £300 at a hearing in Leeds on Tuesday.

Wigan's Gareth Hock is banned for two games and was fined £300, as was team-mate Chris Tuson, who misses one match.

Earlier, Warriors forward Lee Mossop entered an early guilty plea to his charge and was handed a one-match ban.

Mossop escaped punishment at the time, but was charged retrospectively, while Hock, Tuson and Magennis were all shown red cards by on-field referee Ben Thaler.

Wigan will now be without five first-choice forwards for Friday's game at champions Leeds Rhinos.

It was confirmed on Tuesday that against St Helens and will be out for six weeks, while Paul Prescott remains sidelined because of a knee injury.

Meanwhile, St Helens captain Paul Wellens has apologised to supporters after the club succumbed to defeat at the Etihad Stadium, their third loss to Wigan this season.

Saints were blown away by five tries in a stunning opening 25 minutes from the Warriors, a start from which they never recovered.

Wellens, who had the minor satisfaction of scoring his 200th try for the club in the closing stages, told BBC Radio Merseyside: "It's hugely disappointing.

"Our supporters came here expecting a much better performance than what we've shown and we have to apologise to them.

"We played well below what we're capable of and it's hard to take. We know that we have to improve."