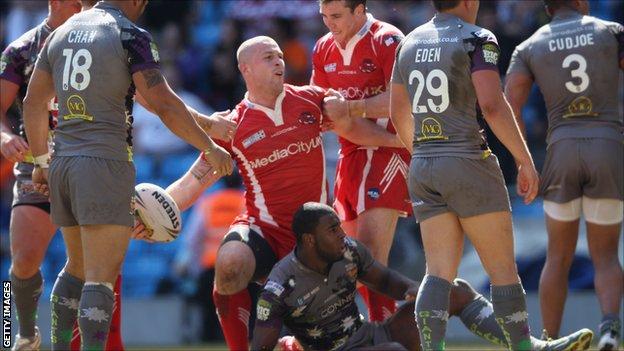 He told BBC Radio Manchester: "We'll take a win any way it comes.

"Over the last six games we've been really close. The team's got a lot of character, they stick together and they work very hard to get what they get."

Salford's last Super League win had come at Bradford nine weeks previously, and there were signs that their results were about to turn for the better after they snatched a late draw against the Bulls in their previous fixture.

Despite the win, they remain 10th in the table and four points behind eighth-placed Hull KR.

But Reds assistant coach Sean Long believes confidence will be very high after beating the Giants, who were the early pace-setters in Super League this season.

"We dug in and it was a really gutsy performance," said Long. "Adam Sidlow is playing with a lot of confidence, he's come on for us and scored a couple of tries which was really good for us."