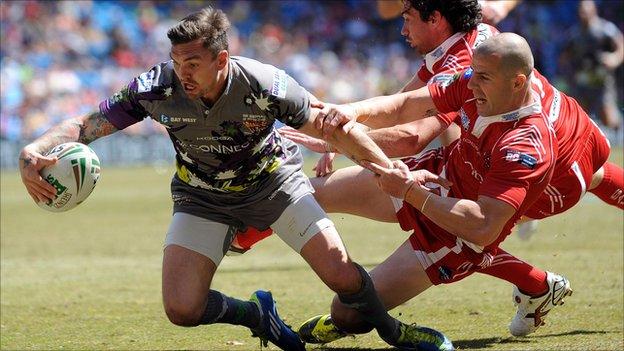 Huddersfield Giants stand-off Danny Brough has said he accepts the recent criticism of the squad following a run of three Super League defeats.

Head coach Nathan Brown called defeat by Salford "embarrassing", while the home loss by Wigan saw the Giants savaged by sections of the media.

"The criticism was rightly so," Brough told BBC Sport.

"Little things we got wrong again [against Salford] killed us, but we're not bothered what goes in the papers."

Brough added: "I don't think we performed on the night [against Wigan] and we were beaten by a better side.

Meanwhile the England half-back has insisted there has been no over-reaction within the squad to the dip in form.

Prior to the run of losses, the Giants had won their last four, and in between have booked a Challenge Cup semi-final date with Warrington in August.

"We're sitting fourth, in the Challenge Cup semi-finals, we're pretty happy where we are, just not where we're going.

"We've got to fix that up ourselves."