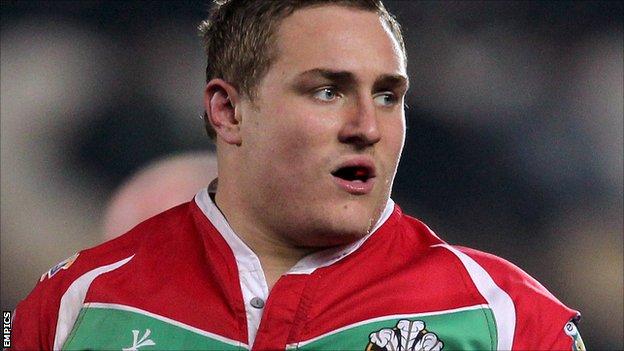 Wigan coach Shaun Wane has praised the progress of young prop Gil Dudson, as he prepares to blood a youthful forward pack against Leeds Rhinos on Friday.

"He probably wouldn't have played many games but he's played really well."

Gareth Hock, Chris Tuson and Lee Mossop are banned for the trip to Headingley, while injuries have ruled out Harrison Hansen,Paul Prescott and Ben Flower.

"We might see the best of Gil next year, but with the situation the way it is, Gil's in," Wane continued. "We've lost front rowers with suspensions and injuries. That's why you have a decent squad."

Hock was handed a two-match suspension and Tuson and Mossop received one-game bans for their part in the mass brawl during Wigan's 42-16 win over St Helens at the Etihad Stadium on Sunday.

It was also confirmed that Hansen broke his jaw in the Magic Weekend fixture, while Prescott and Flower are continuing their recovery from knee and hamstring injuries respectively.

Teenager Rhodri Lloyd is likely to be drafted into the Warriors squad for the game against the reigning Super League champions.

"He's picked up the technical side of playing in the back row for us, which is different to any other club, and I've no problems with him."