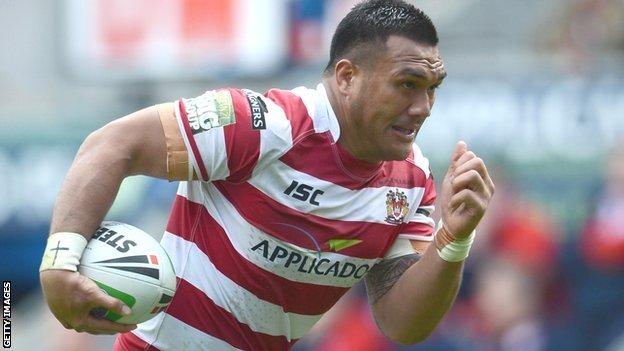 The first half was all Wigan, who scored tries through Jeff Lima, Liam Farrell, Sean O'Loughlin, George Carmont and Thomas Leuluai.

The hosts could only muster a singular Ryan Hall try in a full-blooded half.

Hall added a second after the break but tries from Josh Charnley, Anthony Gelling, Brett Finch and a second from Leuluai brought up the milestone win.

The victory extends Warriors' lead at the top of Super League to three points.

Wigan came into the game with two-thirds of their first-choice pack sitting in the stands and fielding a host of youngsters to compensate for three suspensions and four injuries to their first team.

But crucially they were unbeaten in two months and they provided ruthless performance as they put 50 points past Leeds for the first time since the Rhinos faced Bradford in August 1996.

The hosts were under pressure from the kick-off as a knock-on immediately put them on the back foot.

Hall nearly intercepted a try scoring pass on his line before Lima crashed over from close although replays - which were not referred - showed the Wigan prop lost control of the ball.

Minutes after Brett Delaney had thrown a try-scoring pass behind his man, Sam Tomkins's break found Farrell on his inside to score and Charnley added his second conversion.

Tempers were simmering and the game threatened to boil over on several occasions.

Tomkins's niggle with Jamie Jones-Buchanan handed Rhinos the initiative and as Leeds pushed upfield O'Loughlin was pinged for a high tackle.

Leeds attacked with pace and width to put Hall, who held off Charnley, over for his 130th try.

Sinfield missed the conversion to leave it 12-4 and Wigan came again with sustained pressure.

O'Loughlin hit Brett Finch's pass on the angle and flew over the line as Charnley again converted.

Another finely timed Finch pass put Tomkins in the gap and he glided away before feeding Carmont with the scoring pass to make it 22-4 inside half an hour.

Leuluai rounded off a superb 40 minutes for the league leaders when he crossed at the death.

Charnley scored his 21st try of the season, and converted from under the posts, seven minutes into the second half after a well-worked overlap.

Leeds continued to toil in the face of superb Wigan defence and Gelling made it 38-4 with his converted try on the hour.

Hall claimed his second try with a well worked move out to the left but Leuluai was the beneficiary of a great Tomkins break from dummy half.

Finch finally brought up the 50 when he gathered Shaun Lunt's attempted kick ahead and raced home.

"Under the circumstances it was a good effort to come to a tough place like this and face the world champions with our kids involved.

"I was saying to my players before the game, every now and again you get a special bond with the players and that they need to embrace it.

"We were on fire today. Thomas Leuluai, Brett Finch and Sean O'Loughlin are really buying into what I'm trying to do but we've not peaked yet. We can play well in spells but it will come.

"We've done a good job today but we need to be at our best every week. I need to make sure we are consistent and I want to us to be more ruthless."

"Wigan were on fire - they've done that to a few teams recently.

"They were very good. Sam Tomkins - you only have to give him a little gap and you're away.

"They gained some momentum early in the game and we couldn't get hold of them.

"I've been saying for a couple of weeks now that we're not where we need to be and when we are asked questions by the big teams we haven't been able to answer them. We didn't have the answers for that level of intensity."