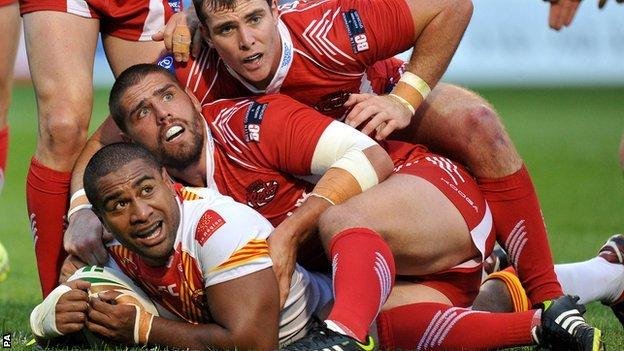 Salford came back from 20-0 down in a thriller to deny Catalan Dragons the chance to go second in Super League.

The Reds hit back via Joel Moon and Daniel Holdsworth but Vinnie Anderson was sin-binned before half-time.

Tries from Sean Gleeson, Luke Patten and two from Jodie Broughton secured victory despite Remi Casty and Vincent Duport's scores for the Dragons.

Dragons become Salford's second big-name victims inside a week following on from Reds' defeat of Huddersfield at the Magic Weekend.

The hosts looked defeated on 24 minutes when they were 20-0 down to the Dragons.

But they clawed their way back in impressive style with 28 unanswered points - despite being down to 11 a one point when Anderson and Daniel Holdsworth were both sin-binned for dissent.

The momentum kept swinging in the second half as the Catalans came back themselves through Casty's touchdown.

Broughton's second score gave the Reds an eight-point cushion which proved unassailable despite Duport's late try for the visitors.

"I'm over the moon. We got two points out of that game and I thought we played some really attractive footy tonight.

"The team showed a massive amount of character today and the bonus for us was that when we were down to 11 men for seven minutes, Catalan only had the ball once.

"We scored two tries when we down to 11 men and the players are saying let's play less men next week."

"[Our performance] was disgusting to watch. It can't be acceptable for any team to play like that.

"It was embarrassing and there was a lack of effort. You can't play like that and it's unacceptable to play that way in Super League.

"There are a lot of players in that dressing room tonight that we can't accept for them to play like that."