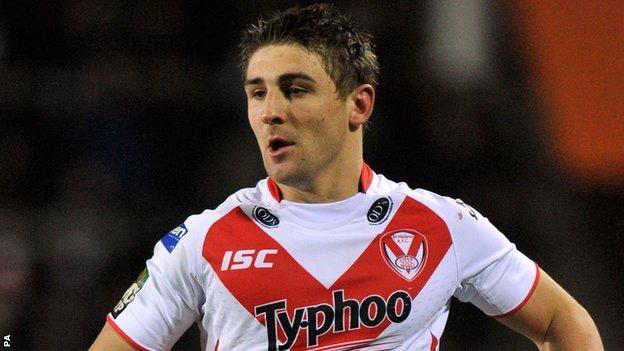 A dramatic late penalty from Tom Makinson saw St Helens fight back to seal a draw with Hull FC.

Adam Swift went over for Saints and Lance Hohaia added a second before Richard Whiting responded with a try for the hosts.

Richard Horne closed the gap to two points after the break, Jon Wilkin then went over for Saints and Danny Tickle levelled before kicking Hull ahead.

But Makinson's third goal of the match late on ensured Saints claimed a point.

It was the second successive game that the hosts had seen victory snatched away from them in the final minute, having lost the Hull derby in dramatic circumstances at Magic Weekend.

Saints took advantage of a penalty award within sight of Hull's try line to go ahead, as Hohaia's long pass found Swift, who crossed over.

Hohaia then added a second before Whiting opened the home side's account, finishing a flowing move out wide orchestrated by half-backs Brett Seymour and Richard Horne, to leave the score 12-6 in Saints favour at the break.

Horne then forced his way over following five repeat sets within sight of the Saints' try line to reduce the deficit to two points.

Saints struck at the other end soon after as Jonny Lomax's pass set up Hull-born Wilkin.

Robust defending from the visitors looked as if it would secure their win before Tickle converted his own try and kicked over a penalty to give Hull the lead.

But with 90 seconds left on the clock, Makinson successfully put the ball over the posts at the other end to leave the sides level at full-time.

"We were guilty of panicking at times, lacking composure and trying to score off a lot of plays rather than sometimes sacrificing plays to lay a line for us to play off.

"They defended very well and it suited their defence the way we played at times. They were outstanding in defence and handled what we threw at them, but we still panicked and tried to go round them and not through them.

"We should have been better than that. We didn't really lay a platform to play off and we didn't take what we've done on the training pitch onto the field, and we have to start doing that."

"We were tempted to run it but at the end of the day Hull were two points above us in the table and we couldn't afford to let them go further above us by risking running the ball, so I think it was a sensible decision to (kick) the penalty.

"I don't think in all the levels I've coached at I've ever had to coach a team that has defended so much and for such a long period of time. I think we only had 12 sets in the second half and when the stats come out it is going to look a very one-sided game.

"We had a good hour and 20 minutes practising our defence and it was a big improvement on what we have done in defence."