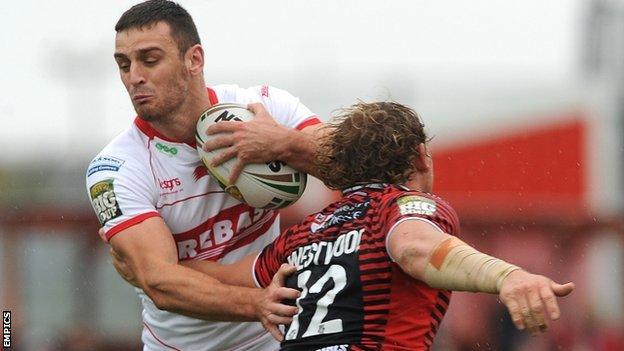 Warrington dominated the first half, leading 18-0 at one point, and were 22-6 ahead at the break after tries from Gareth O'Brien and Ben Westwood, and two from Chris Riley.

But Rovers came out strongly in the second half with Dobson, Sam Latus and Craig Hall all crossing.

And it was Dobson who had the final say to give his side the points.

It was the second comeback victory in a row for Hull KR - they came from 14 points down at the Magic Weekend - and they had to do it without stand-off Blake Green, who pulled up at the end of a training session on Saturday with a hamstring injury.

Warrington, who welcomed back four players, including internationals Brett Hodgson, Ben Westwood and Chris Bridge, made a great start when O'Brien capitalised on a Con Mika error to score from 60 metres before Westwood extended the advantage.

There was an element of controversy about the Wolves' third try, the home side believing Riley had knocked on, but referee Robert Hicks disagreed.

Josh Hodgson cut the gap when he went over under the posts from dummy-half but Warrington struck again moments before half-time through Riley.

Hull KR began the second half strongly and Lincoln Withers sent Dobson over from close range after nine minutes, before winger Latus cut the gap further.

Rovers drew level in the 68th minute when Hall held off three Wolves defenders to score, and Dobson's goal made it 22-22 with 11 minutes to play.

It was then all down to Briers and Dobson, and whose drop-goal technique would seal the points.

And it was Dobson on home soil who grabbed the glory with an angled goal from 20 metres out. Even then, Briers had a chance to level, but his drop goal with time running out drifted wide to the left.

"We knew we have decent players in our team and if we were patient the rewards would come. We were lucky enough in the end to get our rewards.

"The last two weeks' training has probably been the best training I have been involved with in my career.

"Our first half was very disappointing and to give away three tries when we were in possession of the ball was not ideal, especially against a class side like Warrington.

"The boys knew they didn't have to score with every single set. We needed to build some pressure and momentum and from that you can score points.

"In the first half we weren't prepared to work hard and we paid the consequences."

"It's been a while since we played in those weather conditions and it was down to self-discipline. said Smith.

"When you drop the ball at the play-the-ball you know the ball is going to get tackled and we didn't take care of it. You have to make sure you get up with the ball and control it.

"Tactically we were poor in the second half but when you have to do that much defending in those conditions you can slip up.

"You have to give credit to your opponent when they do well. Tactically they were a lot better than us.

"My boys have been playing well but occasionally the football gods give you a little kick up the backside and that's what they did today.

"We controlled things and defended really well in the first half; the second half was a totally different story."