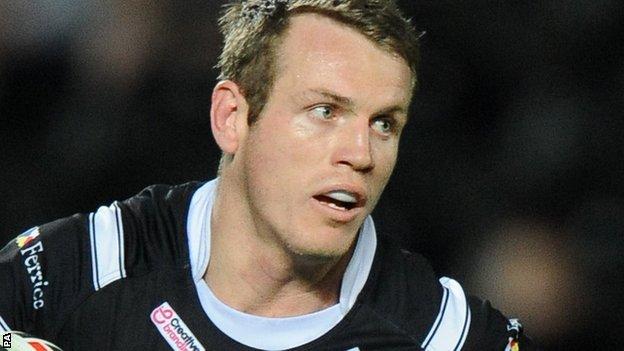 Ben Cross went over to give Vikings a 16-0 lead before Dale Ferguson and David Fa'alogo reduced the deficit to four points at the break.

Scott Grix crossed for Giants and Danny Brough kicked them ahead before Phelps crossed to seal Vikings' victory.

For Widnes, who gave a debut to on-loan Leeds hooker Paul McShane, it was an explosive start as they scored three tries in the opening 11 minutes.

After Ah Van had crashed over in the corner, Hanbury, who had set the first try up with a midfield break, pounced on Joe Mellor's inch-perfect kick to extend the lead.

Cross then dived on McShane's grubber kick before Ah Van added his third goal to give Widnes daylight at 16-0.

But Dale Ferguson then crashed over for the Giants, Danny Brough converting, to reduce the deficit and when Widnes were then to 12 men - substitute Steve Pickersgill sin-binned for holding down Greg Eden - it looked as if the tide was turning.

Indeed, the visitors made the most of their man advantage as Fa'alogo took Brough's pass to score under the posts to leave the Vikings just 16-12 ahead at the break.

Ah Van successfully kicked two penalties to give the hosts an eight-point lead before Grix crossed to cut it again.

Brough converted and his two successful penalties gave the Giants the lead for the first time in the match.

But Widnes were not done. Phelps' try put them back in front and Ah Van added the extras as they secured only their third win of the season.

"The target was not to finish bottom of the table and that's what we are pushing toward.

"Nobody gave us a hope and I know I have said it many times but the fact is some didn't give us a hope of winning a game let alone beating sides that are stretching themselves extensively in the salary cap they are that far away from us.

"We are heading in the right direction and there is a hell of a lot of work going on 24/7, seven days a week to make this club stronger in the right way."

"I thought we actually hung in there well for most of the game.

"They got away to 16-0 which if you keep giving the ball to the opposition and they come up with some nice kicks that can happen.

"Then we got ourselves back in the game and in front and then didn't find touch with a penalty.

"We just don't have the game sense at the moment to understand how to build into a game and adapt to situations."