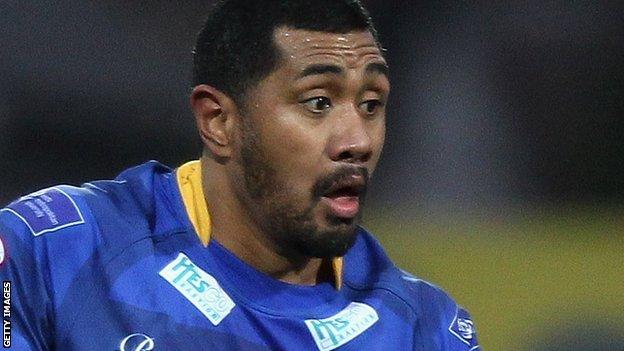 London Broncos dropped to the foot of the Super League table with defeat at Wakefield, their seventh loss in a row.

Vince Mellars put Wildcats ahead before Dean Collis and Ali Lauitiiti, as well as three goals from Paul Sykes, gave them an 18-0 lead at the break.

Danny Kirmond then crossed after the break as Wakefield took their tally to 22 points without reply.

Scott Wheeldon scored a consolation for Broncos, who are now bottom following Widnes's win over Hudddersfield.

Mellars opened the scoring after being put through a gap in the visitors' defence by Lauitiiti.

And after Collis finished off a flowing move, former Leeds favourite Lauitiiti got on the scoresheet as he left the Broncos defence in his wake as he burst to the line.

The visitors then lost stand-off Michael Witt, who suffered a shoulder injury from being trampled on by Lauitiiti, and were down to 12 men on 50 minutes when winger Michael Robertson was sin binned for delaying a Trinity restart.

Wakefield instantly took advantage as Danny Washbrook got Kirmond over for their fourth try.

Wheeldon then collected Chad Randall's pass to cross for Broncos, which Shane Rodney converted, before Sykes kicked over a penalty for the hosts.

"I don't think it was ever going to be spectacular given the trying and testing conditions.

"But we started the game really well and I thought we played some good rugby in the conditions.

"It showed we can grind a win out. We haven't done that much this year.

"Most of their best chances came on kick plays and I thought Peter Fox took some very good balls in testing conditions under pressure. He looked very confident."

"It's not ideal, is it? It's not where we want to be or where we set out to be at the start of the year.

"We play Widnes next week so it becomes a massive game. We need to win.

"They will come with confidence now, having won that game. We've got to look forward and start playing better."