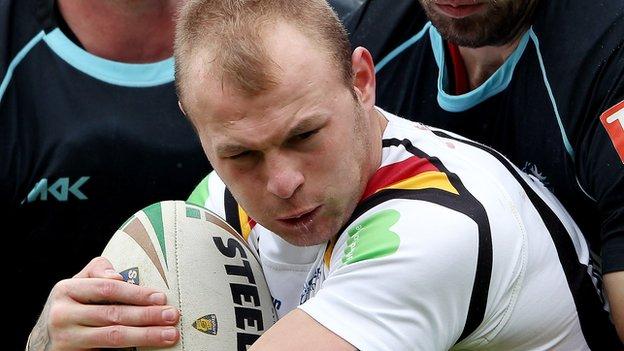 Shaun Ainscough scored a hat-trick and Luke Gale kicked seven goals as Bradford hung on to win a thriller against Castleford.

Ainscough's first two scores helped the Bulls take a 34-10 lead midway through the first half.

But the visitors came back, Rhys Williams crossing twice and Rangi Chase getting his second score.

Castleford cut the deficit to 34-26 and 40-32, but Ainscough's third and Gale's seventh kick sealed it for the Bulls.

The win for Bradford came after it was claimed that their off-field money problems are worse than first thought and the Bulls have also had to cope with Australian centre Adrian Purtell suffering a heart attack on the way back from last week's defeat against Leeds in Manchester.

But this seemed far from their minds as they ran in eight tries, with four in the first 16 minutes giving them an advantage they did not relinquish.

Indeed, when Ainscough was sent over by Heath L'Estrange, the Bulls looked to be cantering to victory, but Nathan Massey grabbed a score back for Cas - the ninth try of the first half - to keep them in the game.

Williams' two efforts got the Tigers to within touching distance and, even when Brett Kearney got Bradford moving again, Chase's solo score kept the match alive.

But with the Bulls clinging on, Ainscough had the final word.