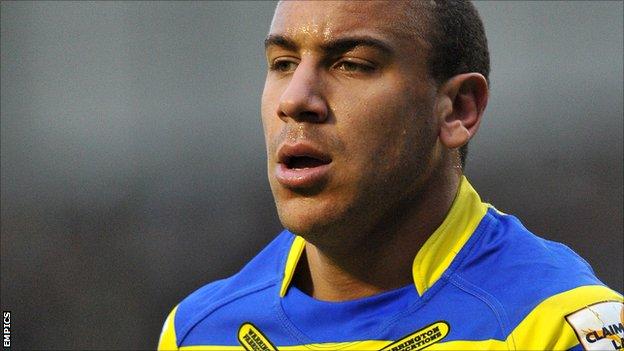 The Wire, who travel to Hull KR on Sunday, have won their last seven games in all competitions and are a point behind Super League leaders Wigan.

"Everyone seems a lot fresher in training if they get that week off," Blythe told BBC Radio Merseyside.

"Obviously you want to play every week but you need to look at the bigger picture at the end of the year."

He continued: "We've rotated quite a lot and a few of the young boys have stepped up. The likes of Ben Currie and Brad Dwyer have done really well."

Blythe scored a hat-trick of tries in the 68-4 thumping of Widnes on Saturday, a result that briefly took Warrington to the top of the table.

The first Magic Weekend to be staged in Manchester proved to be a success in terms of attendances, with almost 64,000 supporters visiting the Etihad Stadium over the course of the two-day event.

"We loved it," said Blythe. "It's the first time we've played there and it's a really good venue.

"I hope they keep it there because it seemed to bring in a few more fans.

"We knew it was going to be a tough game against Widnes if we didn't perform well, but luckily we blew them away in the first 20 minutes."